Raul Honors His Father with a Portrait 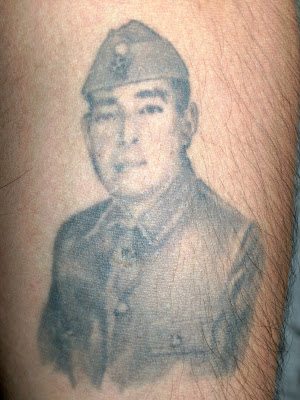 I spotted Raul outside of F.I.T. and stopped to ask him about this portrait on his inner left forearm.

The gentleman pictured is Raul's father, based on a photograph of him taken when he was serving as a paratrooper in the Armed Forces of the Argentine Republic.

Raul told me he always had a special relationship with his father, who had always wanted his son to follow in his footsteps in the military. Raul explained that his father, however, changed his tune about this late in his career.

Raul did not indicate whether this was due to his father's feeling about life in the military, or a result of his seeing that his son was not meant for a life as a paratrooper.

Regardless, the portrait is a touching example of a son's affection for his father.

Raul credits this piece to Triple X Tattoo in Manhattan, and remembered the artist being from Australia and named Mike. A call to Triple X did not clarify this, as I could not connect the three elements to positively identify the artist.

Nonetheless, thanks go to Raul for sharing his inked portrait of his father with us here on Tattoosday!
Posted by Tattoosday at 5:36 AM