After a bit of a drought of inkspotting, I finally caught some new tattoos in Penn Station on Tuesday, along the L.I.R.R. corridor.

Tom has "19 or 20" tattoos and is working to some day achieving a full sleeve on his left arm. He offered me these two tattoos (for Tat-Tuesday), whose close proximity on his forearm made them the natural choice. 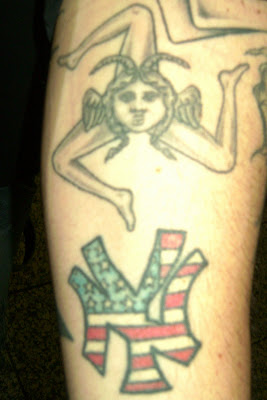 On top is the trinacria of the flag of Sicily. This symbol contains the the (winged) head of Medusa and three bent legs, which supposed to represent good luck and prosperity. 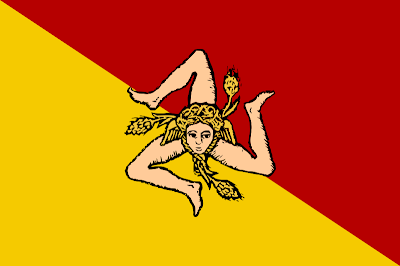 It is a nod to his Italian heritage.

Below that is a New York Yankees tattoo which is very similar to my wife's cousin's stars and stripes-filled NY logo. Tom gave it a simple explanation: "I'm a huge Yankees fan".

Say what you want about other cities, but I would venture to guess that the greater New York City area has a higher per capita count of hometown tattoos than any other metropolitan area.

Tom's ink was done by Rob, owner of Skin Deep Tattoo in Levittown, New York. Work from the shop has appeared previously here.

Thanks to Tom for sharing his work with us here on Tattoosday!
Posted by Tattoosday at 5:37 AM

The three-legged figure is also known as a triskele and has ancient ties to many countries of the Mediterranean as well as ancient Celtic lands in the form of the triple spiral. This symbol is of great importance to many neopagans, especially those of the Celtic reconstruction movement.

Oh shit! I didn't mean to rip off your name on my blog! D=