Tom's Spirit Introduces Me to Eric

I wrote the majority of this post on the way home from my friend Tom Wacker's memorial service on November 12, 2008. I am currently recovering from some outpatient surgery and will use my recovery time to attempt to catch up on things here at Tattoosday.

So I am on my way home from Tom's memorial service. A friend gave me a ride from the church in Ft. Lee, New Jersey to the P.A.T.H. station in Hoboken.

I catch the P.A.T.H. to the World Trade Center station in lower Manhattan. I walk a little disorientedly and find the 2 train at Park Place. I switch at Pacific/Atlantic for an N express train. Standing there in the last car is a bike messenger with full-on ink - his neck is covered and he's got his hands and wrists done. And his long-sleeved sweatshirt is undoubtedly covering a goldmine of tattoos.

But I don't have any of my fliers with me. I left my bag at work. I find some tattoosday cards I made up from www.vistaprint.com and strike myself a deal. He's got earbuds in, and I don't want to strike up a conversation since I am getting off in 2 stops, so I decide, if he gets off at 59th
Street, I'll stop him on the platform. And Tom is backing me up from on high. The messenger exits the train when I do.

So I introduce myself and hand him my card. I apologize for not having a flier, but he stops me: "I e-mailed some pictures to you already."

I've never met this guy before in my life. But I look at him, and recognize his face. His name is Eric and he sent me shots of his phenomenal work back in September. The nature of his work, and the sheer size of it, meant that his face was visible in the photos he sent. Wow. And I've been meaning to post his photos, but they're so rife with incredible work, I couldn't get a handle on it. And I've been busy. And on and on and on.

But now he is "legitimized" as an actual Tattoosday encounter. Of course, I am convinced Tom is behind this coincidence. Whether it's true or not is irrelevant. It makes me feel better.

So Eric peels off a layer or two and gives me an extra piece, on his inner right bicep: 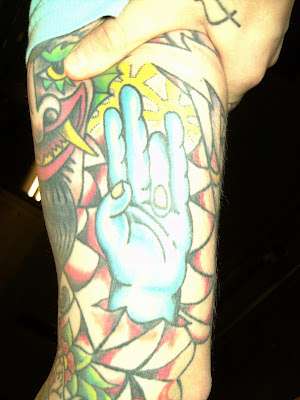 It is a guesture known as "the shocker". I will leave it at that. People who know what it is will understand. People who don't and are curious will research it and be appropriately shocked. And for everyone else, including the aforementioned parties, here's Eric's work: 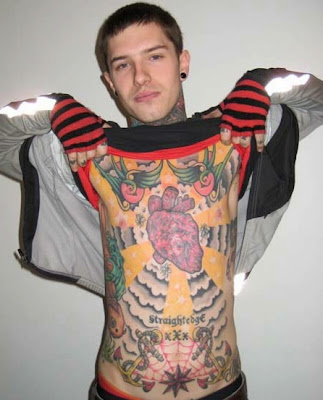 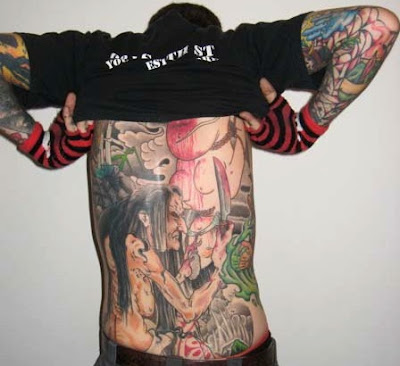 Tom saw these photos when I first received them, and was similarly impressed with the quality and scope of the tattoos.

I think it's apparent why I didn't post them immediately. Where to begin? I like discussing elements in detail, and it seems I could write a novel about Eric's work.

The Shocker tattoo was inked by Jim Class of White Tiger Tattoo in Rochester, New York. In a follow-up email, Eric had advised me that Class "did my turtle neck sleeve, right arm, sides, armpits, entire front, and my left leg. My back, head, and right leg sleeve were done by Mike Dorsey at Permanent Productions in Cincinnati, OH. I've gotten a few souvenir tattoos and conventions along the east coast."

So we've started out small. Stay tuned for future visits from Eric's canvas. I offer him thanks for the initial photos and for stopping to chat with me at 59th Street. And thanks again to Tom for being so instrumental in the success of Tattoosday.
Posted by Tattoosday at 9:51 AM

My name is Chris and I am attempting to find out some information. I work for a supply company and one of my clients was Tom Wacker, I called today to see how my friend was doing and found out he had passed away. they wouldnt tell me how or where I could send flowers so I did a Google search for information and found your blog.
I'm not sure if your friend Tom is the same as my friend Tom but did Your friend work for Plaza associates in New York?
Please post a response, I really liked Tom and called him a friend and we were suppose to get together when I came to NY next month for dinner

Indeed. My friend Tom is the same Tom to whom you are referring. Please e-mail me through my profile if you'd like to discuss further.