Jason's Tattoo Reaps What it Sows

Today's tattoo belongs to Jason, who sports this nifty Reaper on his left forearm: 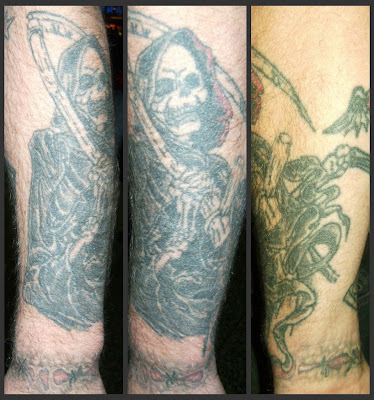 Inked by his younger sister, Mystie, who was an apprentice at the time in Savannah, Georgia, this is one of seven tattoos Jason has.

He had been working as a grave digger and headstone carver and, he said, "after burying kids younger than me," it made sense to get the tattoo. It's a reminder that "nobody's got forever".

Thanks to Jason for sharing his "grim" tattoo with us here on Tattoosday!
Posted by Tattoosday at 5:56 AM