All I Want for Christmas is a Tattoo with Teeth

On Christmas Eve afternoon, I was passing through Penn Station, I spotted Lindsay, a woman with what appeared to be a sleeve that had a water-inspired design.

It wasn't until after I approached her and asked if she wanted to contribute to Tattoosday that I saw, as she rolled up her sleeve, what awesome work she had done on her left arm: 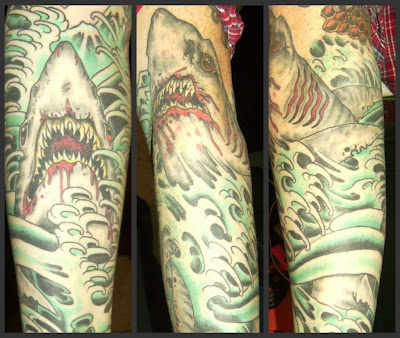 Lindsay said that, like all of her 14 or 15 tattoos, none of them have "deep meaning". She just goes with whatever she describes as an "intense urge" at the time she's getting the tattoo.

The sleeve above started with her taking photos with stylings to the artist, saying she wanted a bloody shark. This was the first part of the tattoo: 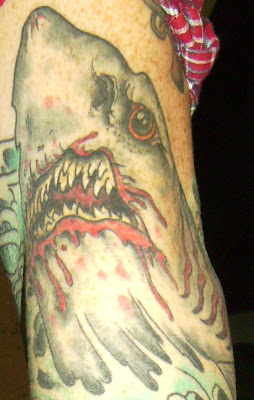 She then expanded it with this segment of shark 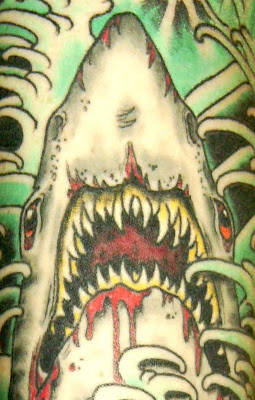 which is certainly reminiscient of the movie poster for Jaws. 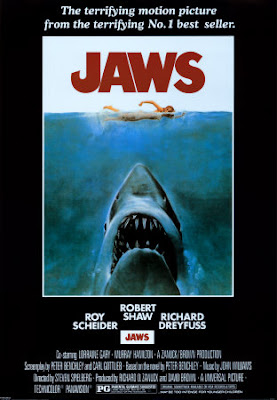 This piece was created in four sittings lasting 3-4 hours each, by John Reardon at Saved Tattoo (which was the shop responsible for yesterday's post, too).

Work from John Reardon has appeared here on Tattoosday previously. Work from Saved appearing on the site can be seen here. Reardon is also the author of The Complete Idiot's Guide to Getting a Tattoo

Thanks to Lindsay for taking the time to share her incredible shark sleeve with us here on Tattoosday!

Merry Christmas and Happy Holidays!!
Posted by Tattoosday at 10:15 AM