I was contemplating the best way to approach a rather imposing figure who was completely covered in ink, when Darren passed me at the entrance to K-Mart in Penn Station.

When I caught up to him in the store, I introduced myself and, being a piercer in a New York City tattoo shop, he was more than happy to indulge my curiosity.

Darren has three tattoos, all on his arms and crafted by Young Cho at Monster Tattoo in the Elmurst section of Queens.

The first piece, on his lower right arm, is a pin-up depiction of Lady Luck perched on a crescent moon: 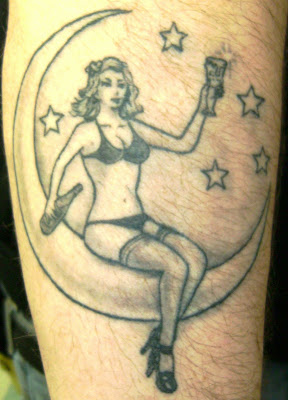 The second tattoo is a half-skull that pays homage to Boys Night Out, a band in which one of Darren's friends plays: 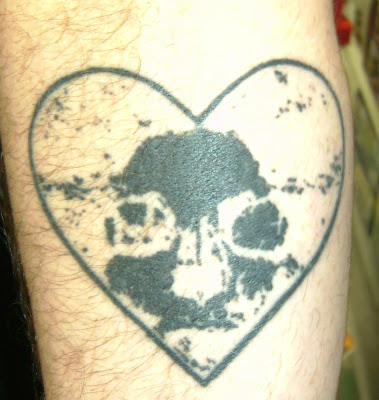 This is the outer forearm on his left side.

Finally, we have this piece, which is more than just a few numbers and letters: 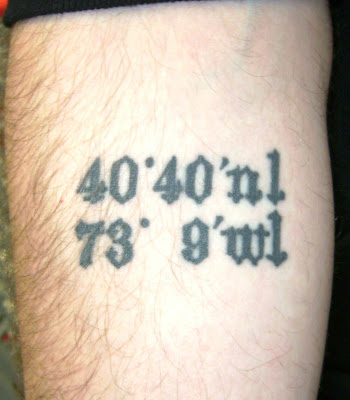 Located on his inner right forearm, this tattoo is translated as 40 degrees, 40 minutes, north latitude and 73 degrees, 9 minutes west longitude. These coordinates refer to a specific location in the world, in this case, a spot in the Great South Bay off the coast of Long Island. It was here that Darren's father loved to go fishing and the coordinates in question mark the spot where his father's ashes were scattered after he passed away.

I must emphatically state that this is one of the coolest memorial pieces I have seen. It is extremely thoughtful and creative, speaking to a point on the earth where Darren knows his father will remain, in spirit, for the rest of time.

I thank Darren for taking the time to stop and chat with me about his three tattoos here on Tattoosday!
Posted by Tattoosday at 5:47 AM