Sean's Tattoo of Odin is a Tribute to His Norwegian Heritage

I met Sean earlier this week in Penn Station and he was kind enough to share this wonderfully-done tattoo of the Norse god Odin:

In the epic poems at the center of Norse mythology, known as the Poetic Edda, one key section from a collection known as the Hávamál features Odin hanging from the world tree, revealing the origins of the runes, which are seen in detail below at the bottom of the tattoo. 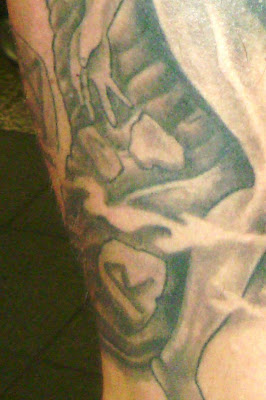 Sean's tattoo is a tribute to his Norwegian heritage.

This piece was tattooed in three sittings by Bobby Chichester at Empire State Studio, in Oceanside, New York. Work from that shop has appeared previously on the site here.

Thanks to Sean for sharing this incredible tattoo with us here on Tattoosday!
Posted by Tattoosday at 5:15 AM

came over to check you out...you gave my husband your flyer after you took this picture of his tattoo! You have some great pictures!

Thanks for highlighting his tattoo of Odin!

Thanks for the comment. It was an honor to have Sean's tattoo on the site!

Welcome to the Garden of Egan said...

My son who is a newly enlisted Marine recruit will be getting his first tat after boot camp. Recommendations for Salt Lake City, UT area? He's got a bunch of buddies in his ear telling him where to go... but I'm not so sure.

Only posted one thing from Salt Lake City before, I think, here:

My best advice is to visit a few shops and then go with the one where the vibe is best, where the tattoo artist shares the same vision as the tattoo. No need to rush into it.