Tom's Sleeve is Based on Faith

I don't know what it was about March, but this final post of the month is the third featuring ink from a member of our Armed Forces.

Tom is eventually going to have a full sleeve that accentuates his faith. The top of the arm is done, with the main focus on the guardian angel on his bicep: 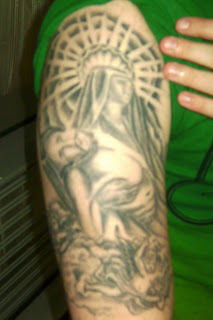 His grandfather passed before he was born and he has always thought of him as the guardian angel that watched over him.

This piece was inked at Aces & Eights Tattoo in Augusta, Georgia.

He also has a couple of tattoos featuring angels on the inside of his bicep and on the outer section of his upper arm as well: 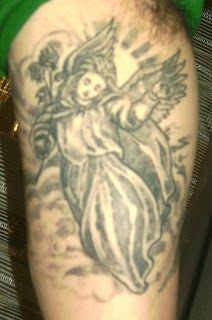 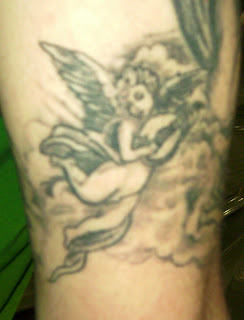 These were done at Third Dimension Tattoos in Marshalls Creek, Pennsylvania

Thanks to Tom for sharing his tattoos with us here on Tattoosday!
Posted by Tattoosday at 10:25 AM