A Selection of Jorge's Tattoos

I met Jorge last week at the top of the escalators leading from Penn Station to 7th Avenue.

He has quite a few, and I took photos of the front and back of his left forearm.

The inner part of his arm has this koi design:

A friend of his did this for him, which he got for luck before going overseas with the U.S. Army to Iraq in 2008. He proudly served with the Third Brigade Combat Team, 101st Airborne Division, 187th Infantry Regiment, also known as The Rakkasans.

Jorge loves what he calls his "good luck koi fish" and says "We deployed for 15 months....every time I was tired for walking for 2 or 3 days nonstop, I would look at my tattoo and smile and keep walking...".

After returning, he got this tattoo in Nashville:

This piece was just a very cool design.

Jorge wanted to make sure they didn't get omitted from the post, as these flowers represent his mother and sister.

That would have been it for this post from Jorge, except the day after meeting him, he sent me this shot of a tattoo on the upper left side of his back: 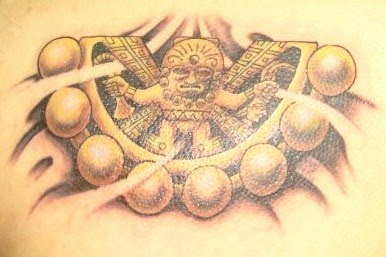 He hadn't mentioned this when I met him, so I was pleased to include it in the post.

Jorge got this piece at Coyote's Tattoo in Lima, Peru.

He says this is a tribute to his mother and his Peruvian heritage. It is based on a pure gold artifact found next to a mummy in Peru which he saw on display in the American Museum of Natural History.

Thanks again to Jorge for sharing so many of his tattoos with us here on Tattoosday!
Posted by Tattoosday at 5:40 AM