Last Wednesday I had a productive inkspotting lunch hour, which culminated with meeting Devin in front of Penn Station.

Devin has three tattoos, two of which are in close proximity on his left forearm: 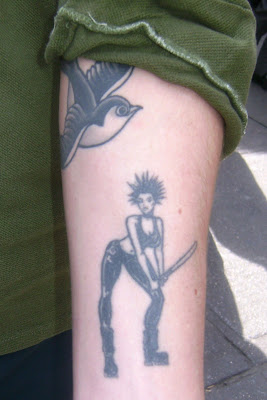 The first of the two he shared was also his very first piece he got when he was eighteen: This "punk rock chick" is based on an old Rancid logo. Aside from being a fan of the band, he liked the design, as well. It was tattooed by Brad Schicklgruber at Mackenzie's Tattoo in Carmel, New York.

Just above that is the sparrow design that is classic flash: 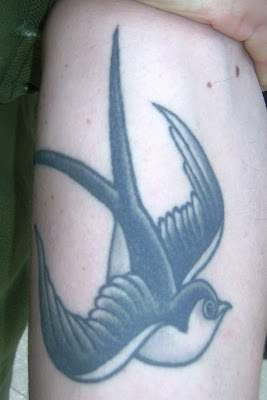 It seemed fitting, then, that Devin had this done by Eddie at Sam O'Reilly's Tattoo Parlour in Santa Cruz, California. O'Reilly's, established in 1891, is one of the oldest shops in the nation and has top-notch artists. Work from O'Reilly's has appeared previously on our site here.

Thanks to Devin for sharing his tattoos with us here on Tattoosday!
Posted by Tattoosday at 6:32 AM