On Saturday, September 8, I saw Heaven and Hell, with Queensryche and Alice Cooper at Jones Beach. Like Ozzfest, there were tattoos everywhere. Like Ozzfest, asking people about their tattoos seemed to be inappropriate, dangerous (at times), and the epitome of dorkiness, especially since Tattoosday hadn't officially spun off yet.

Like Ozzfest, the best I can do is offer candids, although I did get a great shot of one of my favorite's from the show.

Here's a flaming skull on the forearm of an Alice Cooper fan: 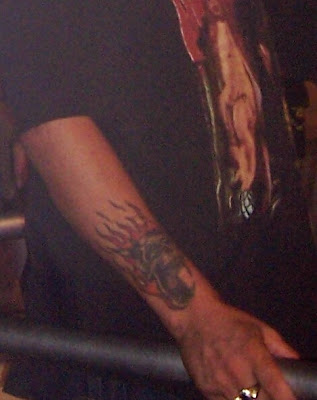 I wish I could have got this one, front and back, but no such luck:

Here's a bit of a blurry sleeve: 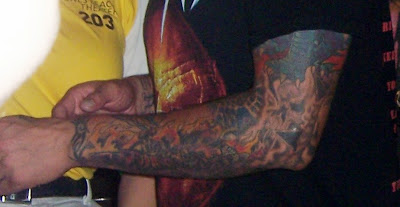 Although I couldn't read the words during the show, I loved the symmetry of this piece: 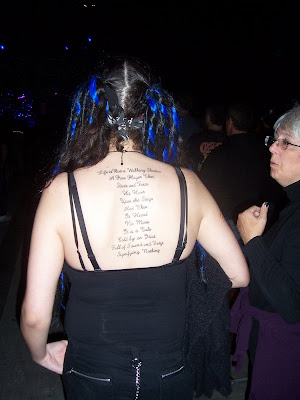 I like the script and the hourglass shape that molds perfectly between the shoulder blades. Even better, when I got home and used my photo editor, I was able to isolate the text and read what was so inspiring as to get someone to ink into their back: 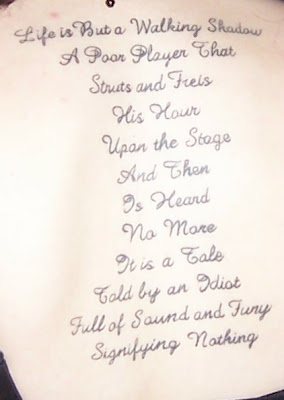 Ah, the bard! Not every day dost thou espy a Shakespearean tattoo:

Life's but a walking shadow; a poor player,
That struts and frets his hour upon the stage,
And then is heard no more: it is a tale
Told by an idiot, full of sound and fury,
Signifying nothing." --From Macbeth (V, v, 19)

Basically, that's all I was able to get at the show. However, the Macbeth tattoo made it all worth it. I have no other concerts on the horizon, so that may be it for a while from the live music venues.
Posted by Tattoosday at 9:44 AM