When I moved to New York in 1997, one of the first friends I made at work was Janet Loder (now Loder-Berthelon). Even though Janet left for greener pastures almost five years ago, we still talk and occasionally get together for lunch or a social jumble of offspring (i.e. our kids play together). Last Thursday, we met at lunch and Janet let me take some hasty shots in the sunshine of her three tattoos. All pictures were snapped on the steps of the New York Public Library, between Patience and Fortitude.

The first of Janet's tattoos was inked in Buffalo, New York when she was 19 or 20, approximately 20 years ago: 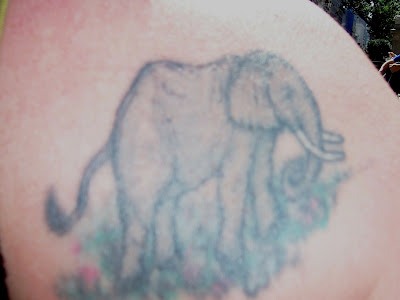 This pachyderm has been touched up twice in the twenty years or so since first decorating Janet's right shoulder blade (aka the posterior scapula). It was the first tattoo I saw on Janet, back in 1997 when tattoos were not as common as they are today. Janet has always loved elephants, and has a few collected, the first of which was given to her as a child by her much-beloved Aunt Claire, for whom her daughter is named.

Janet's love of elephants (and hence her tattoo) stems from their being majestic creatures that are matriarchal and intelligent. They are social beings that even mourn for their dead.

Janet's second tattoo was inked four or five years back at her friend Michelle's bachelorette party: 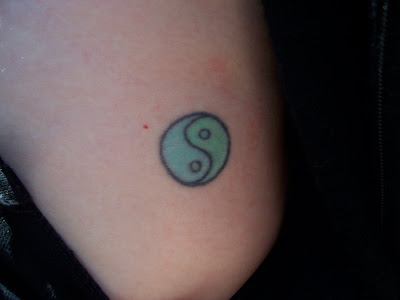 This simple yin and yang symbol, inscribed on the left side of her lower back, was added in the East Village, we're guessing at Andromeda Tattoos Studios. It is a symbol, for Janet, of her striving for balance in her life.

Her third and last (but not final) tattoo was also done at Andromeda, and is on the right side of Janet's lower back: 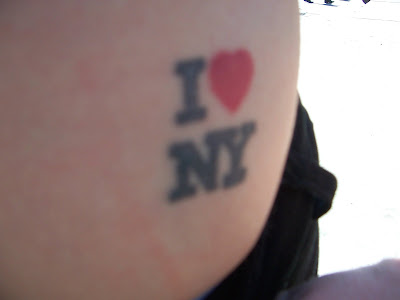 Janet is particularly proud of this one and thinks it has the best story of her three tattoos. I would agree. She had this done in 2004 when she had been traveling a lot on business between New York, San Francisco, and Los Angeles. She began dating a guy in L.A. and was seeing him whenever she flew into town for work. As her California work projects came to a close, their relationship reached a crossroads, and there was discussion and soul-searching over the matter of relocation. He didn't want to leave L.A. Janet was born and raised in Buffalo and is a New Yorker through and through. I can't imagine her living in L.A. And neither could she.

As one might guess, her decision was solidified when she went and had this tattoo done which, "sealed the deal not to move to L.A." Once branded, she mused, there was no way she was leaving New York.

The rest is history.

Thanks to Janet for sharing her tattoos and accompanying stories! You know a friend is true when they'll let you blog about their tattoos!
Posted by Tattoosday at 11:46 PM

oh bill! you do the topic justice. thanks and i'll keep you posted of any future body art. you and mel have inspired me to make an homage at an appropriate time to my daughter... we'll see what emerges!

Numbah one, make it so