Tattoos I Know: The Grim Reaper 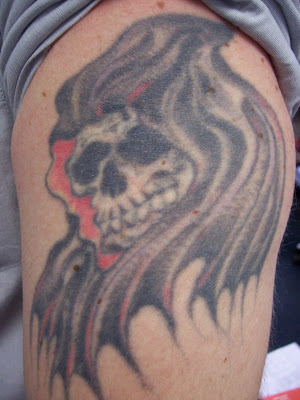 This is the sole tattoo of my friend and co-worker, Tom Wacker.

Tom designed and drew the art upon which this tattoo was based.

The Reaper is posed on Tom's biceps/deltoid and has resided there since 1984, when its host was a young lad of eighteen.

This is Tom's only tattoo and he has no plans to get more. He is proud of the fact that, because he designed it and because he then tore up the original design, it is a one-of-a-kind piece. He said that it was very painful because of the amount of black ink that went into it.

The tattoo was inked by Dean at Lola's Tattoos, then in Cliffside Park, but now in Bogota, New Jersey. Tom got this tattoo "because it was cool," although the tattooer tried to convince him not to get it because it was "too mean" for him. Twenty-three years later, Tom says he has no regrets about his ink.

Thanks, Tom!
Posted by Tattoosday at 9:58 PM