That's what she called it, her "tattool".

Yesterday I ran into Robin, a young woman walking up 8th Avenue, lugging a couple of garment bags, near Penn Station. She had a tattoo on her forearm that was extremely interesting: 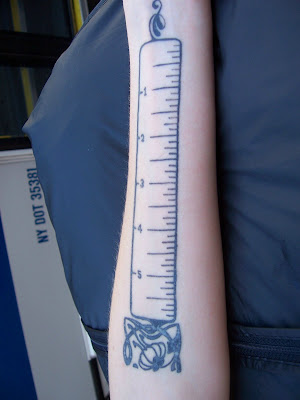 Robin is in New York City working an internship as a Costume Designer on Broadway. She had attended the Art Institute of Chicago and obtained this tattoo there in the Windy City.

"I was tired of constantly looking for rulers," she mused, so she had one inked on. "It's to scale," she beamed, "My tat-tool". Definitely one of the most practical tattoos I have ever seen.

I particularly like the detailed flourishes at the ends of the ruler: 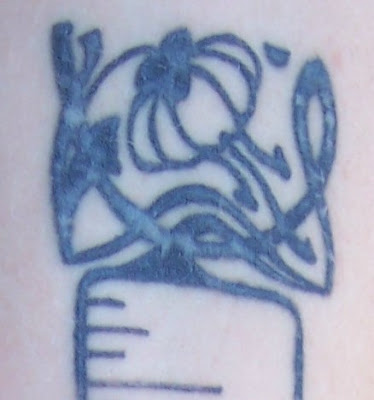 This piece was created by Allie at Tatu Tattoo in Chicago.

I initially noticed Robin's first tattoo, on the back of her neck, as she walked briskly by me. She has short hair, with a bare neck, so this small piece really pops off the skin. When I asked her about this: 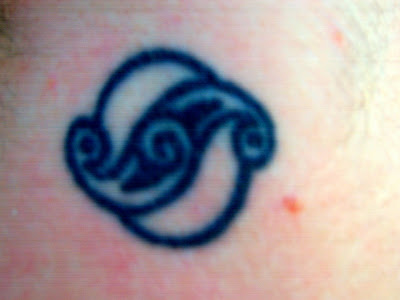 she indicated that she has a twin sister with the exact same symbol on her neck. She was tentative about where, exactly this was done. Originally hailing from Eugene, Oregon, she thought it might have been done at High Priestess in her home town. She threw in a disclaimer that High Priestess might be only a piercing shop (it apparently is), so we're not sure exactly of the name of the shop where this interesting piece was tattooed.

Nonetheless, Robin was an interesting person to meet, very friendly, and the possessor of a very cool tattoo that serves as a measuring implement as well.

Thanks to Robin for her willingness to participate in Tattoosday!
Posted by Tattoosday at 5:56 AM