The Squid and the Elephant 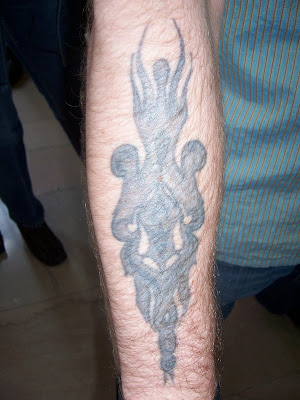 A seriously long line at the Post Office cut into my outside time at lunch, which adversely affected my tattoo-spotting on Wednesday.

However, I took advantage of the long line at the Philatelic Window and introduced myself to Barrett, who offered up the tattoo above.

He has four tattoos, but this was the only one visible. It was inked about 13 years ago in his home in Colorado by a free-lance artist named Bryan Saren.

Mr. Saren is mentioned in several Durango, Colorado newspaper articles as a local artist and sculptor. I will assume its the same guy.

Barrett designed this piece himself and, although he acknowledges that it resembles the "tribal" category, he doesn't consider it a tribal tattoo.

He was just playing with the design and liked the end result, which is comprised of a melding of a squid and an elephant. 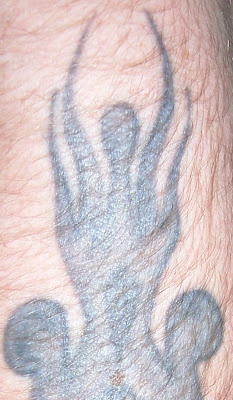 The squid is at the tail end, or top of the piece. And the elephant is at the front. A closer look shows the center axis is comprised of the elephantine trunk, surrounded by two shorter, curving tusks.

No special significance to squid and elephant, just part of the design elements.

Thanks to Barrett for sharing his work with us here at Tattoosday!
Posted by Tattoosday at 6:55 AM