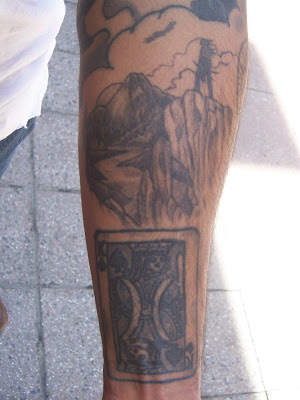 One of my tricks for locating tattoos is to walk by the Borders on Penn Plaza and see if anyone's reading tattoo magazines.

On Thursday, I spotted Sheldon in the store in the checkout line. He had two sleeves worth of ink, but I am trying to steer clear of big, wrap-around pieces, because I don't think I can give them a lot of justice in a blog format. There are exceptions of course (here and here, for example), but one generally needs a little more time to do it right.

Anyway, I settled on the left inner forearm (above) that had two distinct pieces.

The top piece was inked in Pensacola, Florida, when Sheldon was in with the Marines. It is a design of a Native American looking out off of a cliff. 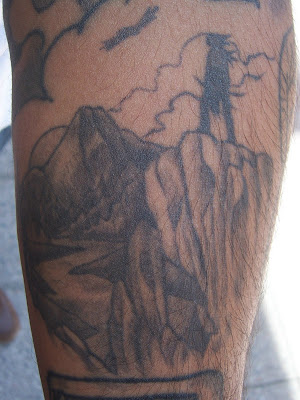 The one below it is a King of Spades, but will skulls instead of faces. A friend of his had the Jack of Hearts, so he went with the King of Spades. 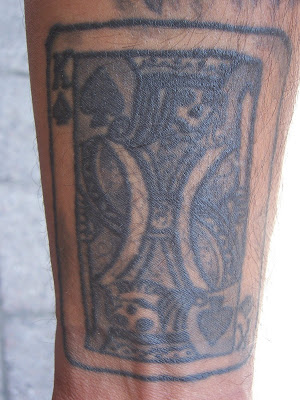 He credited this tattoo, along with all his other work (the Native American piece, excluded) to a custom artist in Japan named "Augie". Sheldon was stationed there with the 31st Marine Expeditionary Unit and had a lot of work done before being deployed to a different theater of operations.

Most of his work on the right arm is traditional Japanese design. He started initially with the forearm and then went from the elbow up over the shoulder and onto his chest. He said is was a "yakuza design".

Sheldon told me that Augie didn't have time to finish the left arm, due to his re-deployment, but that he hopes to return to Ginowan, Okinawa to finish up his sleeve.

Thanks again to Sheldon for sharing his ink with us here at Tattoosday!
Posted by Tattoosday at 7:17 AM