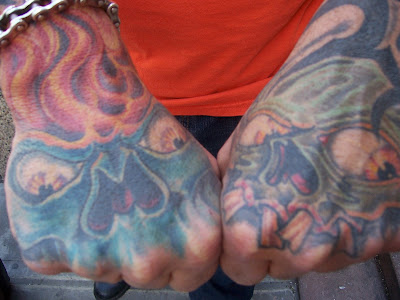 I spotted these tattoos on the plaza outside of Borders Books at Penn Station.

He was in town visiting family and he certainly had a lot of tattoos to offer. "Thirty-nine," he answered, without hesitation when I asked him how many he had. His arms were fully-covered and he had others on his neck.

We settled on these, because it seemed easiest, and Tattoosday has never presented fists before.

All his work was done at Bayou II Tattoos in Picayune, Mississippi. He credited all his work to Chip, and said the art on his hands was custom-designed.

Thanks to the guy from Florida for sharing his work with us here on Tattoosday.
Posted by Tattoosday at 11:50 PM