Two for Tattoosday: A Break-Up Tattoo and Some European Tribals

Sure I'm posting Wednesday but both of these volunteers were MSG plaza-dwellers on Tuesday and, rather than save then for separate days, I thought I'd put them together.

First up is Erik: 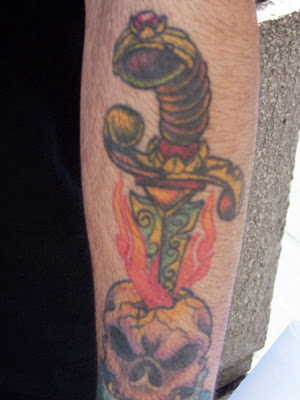 Sorry I cut this off, but I couldn't see the screen in the sun's glare. Erik has a 3/4 sleeve (left arm), his mother and grandmother's names inked on, a small back piece, a leg piece, and a diamond on his chest, but we went with this design, on his left forearm, because it is more recent.

Tattooed by Eric Newman at Silk City Tattoo in Hawthorne, New Jersey (the shop was credited previously only two days ago here), this piece, a dagger through a flaming skull, was purchased for Erik by an ex-girlfriend, after she broke up with him. It is meant to represent a new beginning.

At the end of the day I met Cesar, also in front of the Garden. This is the tattoo that caught my eye: 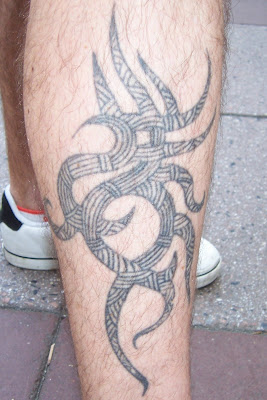 I'm not a huge fan of tribal pieces, but this one on his right calf is one of the nicer pieces I have seen in a while. I especially like how it is not a solid black design, but resembles a textured wood. Cesar, who is from Italy, is in New York for only two days, and we had some difficulty communicating. This tattoo was inked in Brescia, in Northern Italy, and cost $40. (He offered, I have decided asking is not polite.)

He then showed me a tiki piece on his inner right bicep: 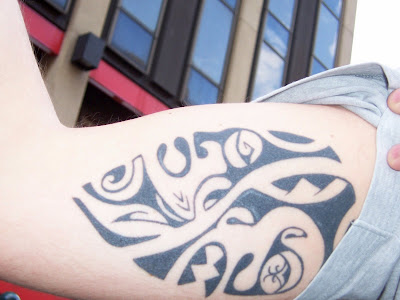 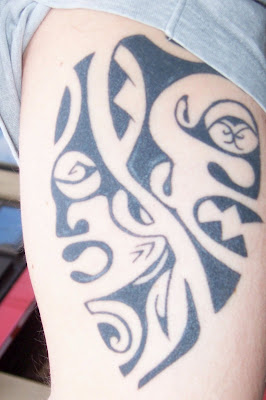 Cesar told me the name of the shop was Sara, but I couldn't find a listing. However, considering the type of tattoo he received, I am going to go out on a limb and guess he got this piece at Tahiti Tiki Tattoo.

Thanks to Erik and Cesar for making Tattoosday a true Tat-twos-day!
Posted by Tattoosday at 5:23 AM