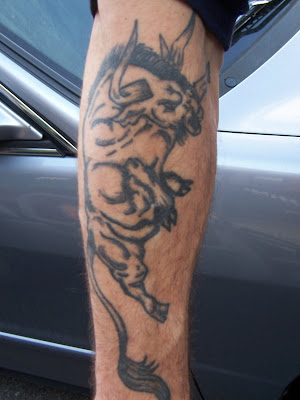 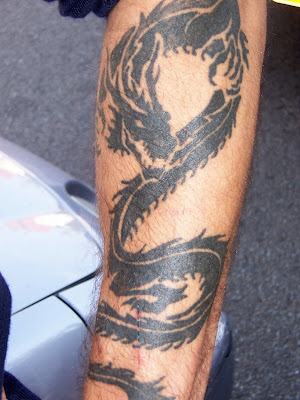 I ran into Joe outside of Nino's Pizza in Bay Ridge, at 92nd and 3rd Avenue.

His two forearm tattoos represent his belief in astrology.

Both are relatively recent inkings. The dragon is about a year old. On his left arm, the piece was inked at Hypnotic Designs in Sunset Park, Brooklyn. He believes by Angel. Hypnotic Designs work has appeared on Tattoosday twice before, here and here (Angel credited there too). Joe was born in 1976, the Year of the Dragon in the Chinese Zodiac.

The bull was inked at a shop in Ft. Lauderdale, Florida. Joe is a Taurus, astrologically, and the two pieces complement each other nicely.

Joe is currently having a chest piece done at Kings County Tattoo Company. He couldn't show me the piece entirely, and it isn't colored yet, but he was absolutely raving about the quality of their work. Kings County tattoos have appeared previously on Tattoosday here.

Thanks to Joe for chatting and sharing his astrological tattoos!
Posted by Tattoosday at 5:30 AM