Jeremy's Patriotic Tribute to His Father 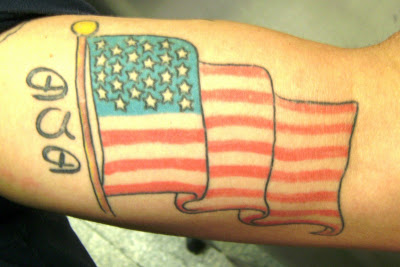 I spotted this patriotic and paternal piece earlier this week at Penn Station.

Jeremy explained this straight-forward tattoo, which is inked on the inner part of his left bicep. The design is a tribute to his father, who died on the 4th of July, 2001. Dad had served in the U.S. army in the Korean War and it seemed fitting to Jeremy, who has six tattoos in all, to honor his memory with this piece.

Thanks to Jeremy for sharing this tribute to his father with us here on Tattoosday!
Posted by Tattoosday at 8:02 AM