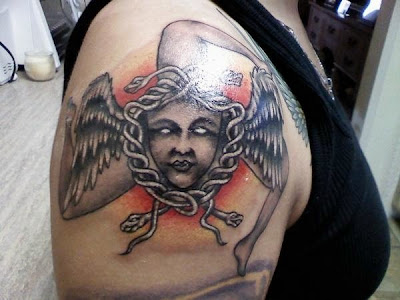 A couple of weeks back, I posted some ink from a guy named Tom (here), which featured the trinacria of the Sicilian flag.

The above example, from our good friend Fabiana (see her last post here - which links to her previous ones, as well), is a more colorful and elaborate take on the design.

"The tat of the Medusa head I got because it's on the Sicilian flag. I was born there and it reminds me of all that I left behind, kinda just reminds me of my fam there and the time I lived there and all the things I went through! I love Sicily! It's such a beautiful place, hope I can return there some day! So now I look at it and it takes me right back to where my life first began."

This piece is on her upper right bicep and, like most of her work, was inked by Lou at Third Eye Tattoo in Brooklyn.

Another relatively new piece on Fabiana is this card on her left forearm: 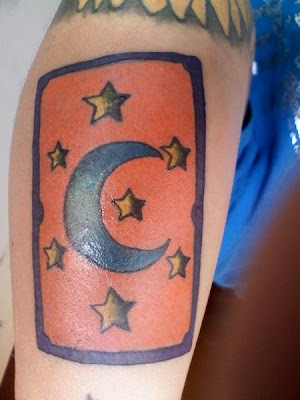 Again, in her own words:

"The other new one I have is the orange one that kind of looks like a card. I got that because of my ex-girlfriend. I used to say to her 'I love you to the moon and back and all the stars in the universe.' So because of that, I got a moon and seven stars with the color orange because that was her favorite. She meant a lot to me but things just didn't work out. I will love her always!"

Yet again, a hearty thanks to Fabiana for letting me post her ink here, and for sharing the deep personal meanings behind the tattoos.
Posted by Tattoosday at 5:29 AM