As I had mentioned, I was able to locate the artwork on which this earlier tattoo was based, but the specific source of the new design eluded me.

So I popped into the local Borders and, after wandering a bit, found the Horror section wherein the King books resided. I perused the covers but, alas, no sign. I was about to leave when a store employee named Jill popped up and started straightening books next to me.

And she had ink.

So we got to chatting. She has seven pieces in all, three of which I saw. She has designated a theme for each of her arms and legs. I had noticed the pin-up on her right forearm first, which turns out is her Celtic-themed limb. She isn't happy with the red in the dress, so that piece is technically a work-in-progress. Her left arms sports some kanji, as part of her Asian-themed limb.

Her left leg is desert-themed, as a tribute to growing up in Arizona. Which brings us to her right leg. Jill has that part of her body designated as water-themed. She went to her favorite artist Shaggy at Rings of Fire Tattoos in downtown San Antonio, Texas, and told him she wanted a tattoo to fit the theme. He had drawn this design with the octopus and she loved it. The rest is history: 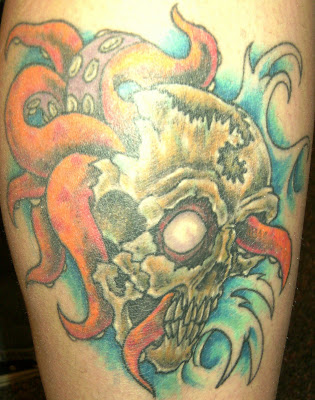 I love how the octopus is staring out the eye socket of the skull. It's an amazing effect.

Thanks to Jill for sharing this awesome piece with us here on Tattoosday! Here's hoping she'll be back on these pages for a return engagement!
Posted by Tattoosday at 6:55 AM

Wait, what's the theme for her right leg exactly?