Tattoos from the Blogosphere: The Back of Nathan's Legs 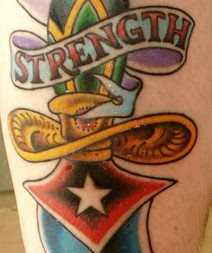 My recent affiliation with Nathan over at KnuckleTattoos.com has been fairly sparse with the cold weather seizing the Northeast. However once he added me as a contributing writer, I queried about him sending me photos of some of his ink to put up over here on Tattoosday. This post reflects a couple of leg pieces he sports. 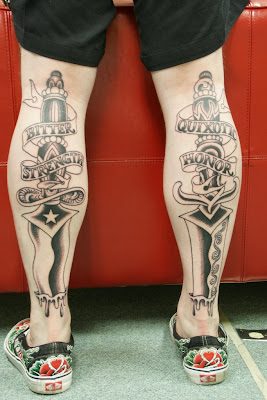 And then, with some color, in its completed form: 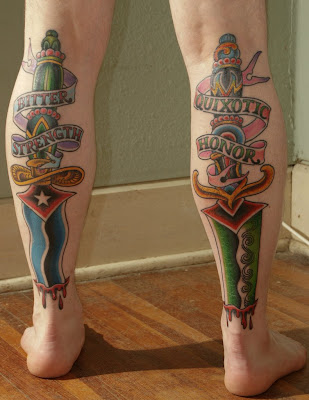 These pieces were inked by Jason Brooks ("he is incredible") at Rock of Ages Tattooing in Austin, Texas.

The following is an excerpt from Nathan's blog, which begins to explain "bitter strength" and "Quixotic honor":

So I went under the gun again. First time in almost six years. I was just supposed to get the outlines done, but then his appointment after me canceled and I got a four hour session. The crook behind the knee and the area around the Achilles tendon were miserably painful, but the rest was pretty tolerable.

The theme behind the piece is a warning about virtues bordering on being vices. Values that can bite you back. Just because I am strong enough to endure hardship does not make it any less hard. Sometimes not bearing the load is better than having the strength. Honor is good up to the point that it becomes pride or self delusion. Of course it also works backwards. I am strong enough to persevere. Sometimes the windmills are dragons in disguise.

Thanks to Nathan for sharing his ink here on Tattoosday. Be sure to check out his ink blog here. Who knows, may be you'll see a post by yours truly over there one of these days...

Posted by Tattoosday at 7:32 PM