Any Port in a Storm: Chris Wears His Clipper Ship with Pride

I spotted this beauty of a tattoo in Bay Ridge on the calf of Chris: 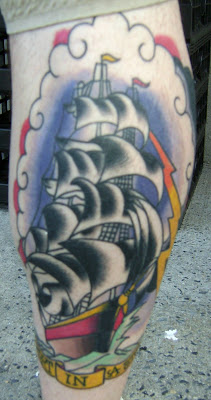 He explained that it is a cover-up and took Alex Franklin at Brooklyn Ink about four hours to complete. Work from Alex and the other artists from Brooklyn Ink have appeared previously on Tattoosday here. 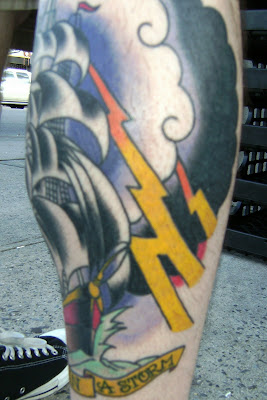 Chris is originally from Boston and he said the clipper ship tattoo just "seemed like the New England thing to get". He later elaborated, in an e-mail:

"I wanted to get something true to where I've grown up and my heritage. A clipper ship is a very New England type tattoo and I was born and raised in Boston before setting off to NYC. Ships also mean a lot to me as 3 of my relatives left England for NYC on the Titanic and 1 of them perished at sea with the ship. In addition, my grandfather was aboard the Navy's USS Allagash in the Korean War. Any Port in A Storm is an important saying for me, because I am a cop in Brooklyn. Essentially it means, when you're in trouble, any way out is a good way out, whether or not you like the decision.

Thanks to Chris for sharing this wonderful tattoo with us here on Tattoosday!
Posted by Tattoosday at 5:29 AM

Awesome tattos! I have a few more week until I get mine done=) Pls visit me at my site:
http://anewtattoo.com thanks and have a great week!

Chris that tattoo is awesome. I really like the story about why you got it as well.