It was a string of elephants marching above Stephanie's right ankle that first made me stop and talk to her, but she offered up this, her first tattoo, as well: 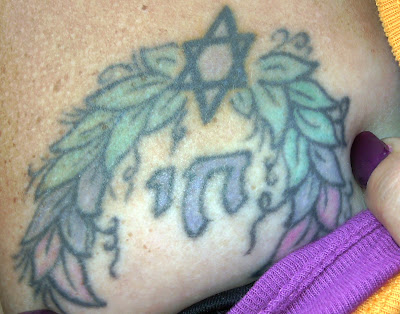 She started with the Chai at the top of her left breast. At the time, Stephanie was dating a guy who was covered in tattoos., She was 35, uninked, and going through a mid-life crisis. The shop was in Brattleboro, Vermont, but it has been gone for years.

She liked the tattoo so much, she later added the Star of David and the leaves. The Jewish theme was a tribute to her cultural identity as a Jew.

It somehow seemed both suiting and slightly inappropriate to post these tattoos on Yom Kippur, the holiest day of the year on the Jewish calendar.

I am waiting to hear back from Stephanie for clarification on her string of elephant tattoos. But, in the mean time, I thank her for sharing this deeply personal tattoo with us here on Tattoosday.
Posted by Tattoosday at 8:27 AM