I spotted an amazing tattoo-in-progress last month in Penn Station and I just had to stop and ask the young lady what it was about.

Camila has a piece that, among other things, represents the cityscape of Rio de Janeiro, circling her lower left calf. Alas, you won't see it here (yet), as it is not finished. [Update, November 16, 2009: Camila sent me photos of the tattoo which was subsequently finished. See it here.]

Some people are reluctant to have me photograph their works-in-progress, as they would rather the tattoo be complete before being displayed for all on the blogosphere to see. Others are indifferent and tell me to snap away.

There's pros and cons to both approaches, but one of the pros is that we see a tattoo in its pre-completion stage and then get to see it after it's done. The two versions are often quite interesting to compare and contrast.

But that's neither here nor there. Fortunately for me, Camila has ten tattoos, and she offered up this quote attributed to Mahatma Gandhi on her inner left forearm: 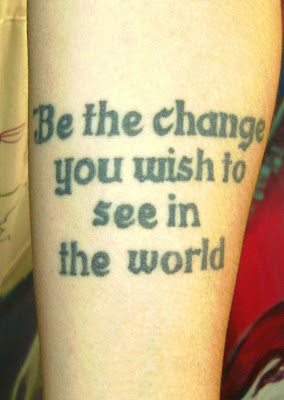 The quote, "Be the change you wish to see in the world," speaks to Camila, as she is a social worker and, she says, "it represents what I stand for in life".

I thank Camila for taking the time to chat with us on Tattoosday, and look forward to featuring her other tattoo(s) in the future!
Posted by Tattoosday at 6:17 AM