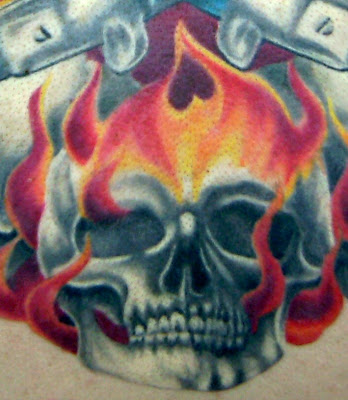 I had just exited from the subway station in Bay Ridge when I spotted an extremely-inked couple.

I talked with both of them, but Mike was gracious enough to share this phenomenal back piece: 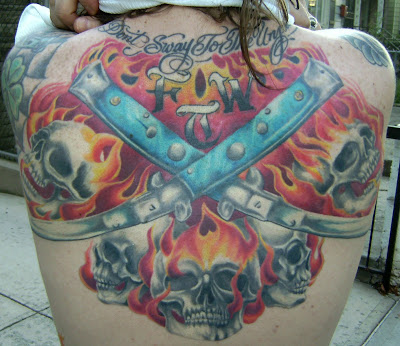 Mike, a musician, has been on the receiving end of the tattoo machine for many years. He is currently lead singer/bassist for The F.T.W.'s, a New York-based rock band.

He even speaks nostalgically about the mid-90's, when tattooing was still illegal in New York City. He has a critical eye and like many people with a commitment to old school tattooing, is dismayed by the skyrocketing popularity of the art, and the subsequent deterioration of the overall quality of tattoos.

For every great tattoo you see here on Tattoosday, there are two dozen others that were inked because they are trendy, and not out of appreciation of the art.

We had a lengthy discussion about this and I worried he might not be so down with the site because I don't always feature top quality tattoos, and am oftentimes just as interested in the story behind an average tattoo as I am in a convention-quality piece.

As for Mike's back piece, he credits Miss D'Jo at the fabulous Lark Tattoo in Westbury, New York for the creation of this gigantic tribute.

See other work from Lark on Tattoosday here.

Mike spoke of a friend and tattoo artist, Chris Lewis, who committed suicide many years ago. Chris had given Mike a knife as a gift, and after his friend passed, Mike had this quasi-memorial back piece done. The knives in the tattoo are modeled after the blade in question.

The detail in this gigantic tattoo is simply phenomenal. Just take a look again at the handiwork on the knives: 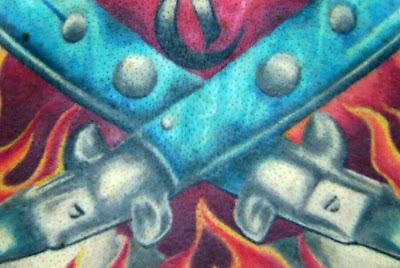 Much thanks to Mike and his girlfriend Amanda for stopping and talking tattoo with me. Your contribution to Tattoosday is much appreciated!!
Posted by Tattoosday at 5:36 AM

I love large back pieces - this is some amazing work

I remember Mike Ledger doing my chest piece in the early 90's back then you tattooed because YOU HAD to - good days!