No Hope But Home

I met Matthew walking through Penn Station last week. He has several tattoos, and shared this one with me: 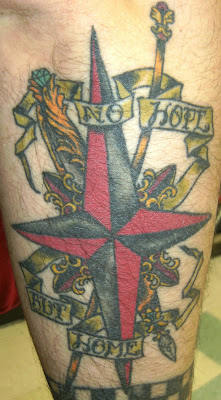 On his right arm, this traditional nautical star has been embellished with several design elements that personalize the tattoo.

The banner "No Hope but Home" refers to lyrics from a song by a New Jersey band called Scream Hello.

The nautical star is accompanied by a knitting needle and a fountain pen. These two objects refer to his parents. The knitting needle speaks to his mother who is a homemaker and also knits as a hobby. The fountain pen alludes to his father, who is a writer professionally, and also
writes for pleasure.

The nautical star, traditionally worn by sailors to serve as a talisman to find a way home, serves a figurative purpose here, pointing toward, while also emphasizing the hopefulness of home, but also the importance of Matthew's parents in his life.

This cool tattoo was inked by John Reardon at Saved Tattoo, in Brooklyn. Work from Saved has appeared previously on Tattoosday here.

Thanks to Matthew for sharing this amazing tattoo with us here on Tattoosday!
Posted by Tattoosday at 5:28 AM