Dave's Portrait of His Great-Grandfather

I spotted Dave at the end of July while picking something up at the 34th Street K-Mart.

He kindly shared this wonderful portrait of his Great-Grandfather, tattooed on his forearm: 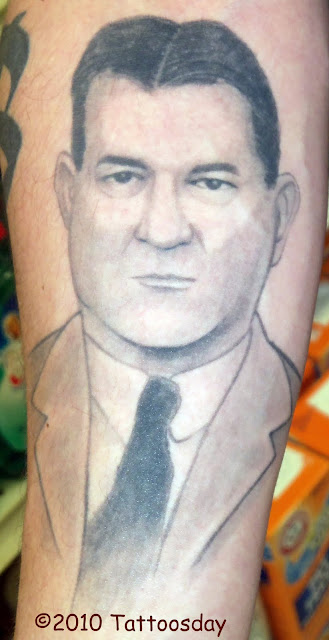 His grandfather was originally from Cuba, immigrating to the United States in the 1930s.

And although he passed in 1994, Dave recalls something his grandfather always said: "it's never too late, until you're dead".

Tattooed by Lalo Yunda at Sacred Tattoo NYC, Dave has the pleasure of carrying his very important ancestor with him, wherever he goes.

Thanks to Dave for sharing his inked family heritage with us here on Tattoosday!
Posted by Tattoosday at 6:36 AM