When I met Chloe back in July, I didn't think that the tattoo she offered would be saved for an anniversary, or a special occasion, but that is how it played out.

In fact, when I approached her in the Union Square Barnes & Noble, I was more interested in a design on her thigh. However, she dismissed that tattoo, one of her first, and offered up this relatively crude rendering of the American flag: 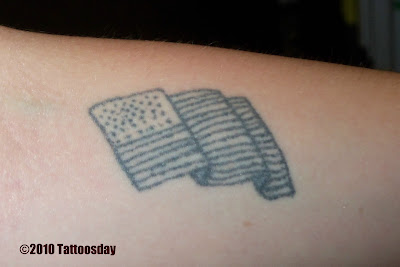 By crude, I mean unpolished, and I do not mean it disrespectfully. For Chloe disclosed that this was a "stick and poke" tattoo that she and her friend Luke had given one another when in school.

Chloe was a Visual Arts major and explained that, in college, everyone seemed to be "poo-poohing on America," and this bothered her.

It is occasionally the case where college students, from their campuses, speak out against our country.

But Chloe and Luke wanted to make their own personal statements. "We do have a lot here," she told me, and expressed her dismay at those fellow students who seemed to take our freedoms for granted.

Despite the fact that it was not professionally done, it seems appropriate that this tattoo appear here on Patriot's Day, on a day on which we give pause, and remember what America is about. Our freedom is not something to take for granted and, whereas we certainly have a right to voice our discontent with the government, we should also not take for granted the freedoms we do have, those that make us who we are.

Thanks to Chloe for letting us unfurl her flag here on Tattoosday, on this day in which we should all pause and reflect, remembering how fortunate we Americans are to live in such a wonderful country.

I also encourage people to check out previous Patriot Day posts here, here and here.
Posted by Tattoosday at 10:33 AM