Tattoo from a Francophile

Earlier this summer, I posted a couple of tattoos from Joe, seen here.

Needless to say, Joe became a fan, and updated me with a new tattoo, below: 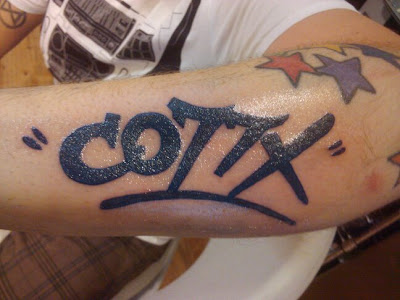 
"The picture is fresh from the artist finishing it. It is "C077X" and is a nod to James Franco and General Hospital. He is my fav actor and I have been watching General Hospital for at least 21 years. It is the the tag that "Franco" sprayed on everything when he recently guest starred on GH as an artist/serial killer. His character's name is Franco, reflecting that art imitates life. A motto the actor and character believe, and so do I. That is why I got the tattoo. To prove art imitates life!"

The tattoo was inked by Rob at Brooklyn Ink. Rob originally appeared here as a contributor here. And is one of several artists that has represented Brooklyn Ink over the years on Tattoosday. This label links all of the work from the shop previously seen on Tattoosday.

Thanks to Joe for sharing his new tattoo with us here on Tattoosday!
Posted by Tattoosday at 5:54 AM

I love this tattoo. I am also a big fan of General Hospital and James Franco. He did an amazing job as Franco the serial killer/artist on the show and I look forward to seeing more of him. This is a great website.