Last month I met Melinda on the West 4th Street subway platform, a location I came to appreciate this past summer for its diversity of interesting tattoos.

Our conversation began on the platform in Manhattan and ended in Brooklyn after a trip on the D train.

Melinda has two tattoos and she shared this one, from her inner left forearm: 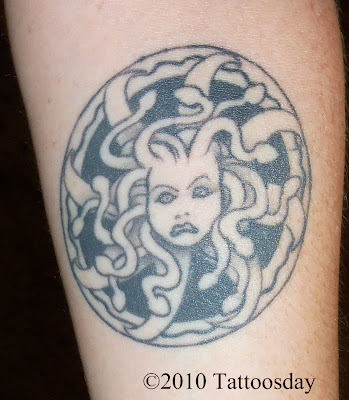 She explained that this tattoo is based on the shield of Minerva (in the Roman pantheon) and Athena (in the Greek pantheon).

The shield features the head of the serpentine-tressed Medusa who, if you didn't know, could turn creatures (men, mostly) to stone with a simple gaze.

Melinda loves the contrast between the Minerva and Medusa figures and the relationship between the two mythologies.

The tattoo was inked by Kelly Krantz, of the now defunct Hold Fast Tattoo in Brooklyn. Kelly now tattoos by appointment only, and more details can be found on his website here. Work by Kelly has appeared previously on Tattoosday here.

Thanks to Melinda for her good company on the D train back in August, and for sharing her tattoo with us here on Tattoosday!
Posted by Tattoosday at 6:33 AM