It's not often that I get someone to share facial tattoos here on Tattoosday, but the occasion arose last month while I was browsing at one of my favorite inkspotting locales, the Borders in Penn Plaza.

I was lucky to meet Catanya, who I noticed had interesting markings on her face, and I was compelled to ask her about the ink. She gladly posed and told me a little about the designs. 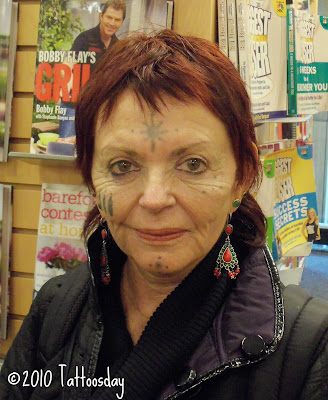 Catanya explained that she got her tattoos in the 1970's in New York. She was involved as a dancer in the art scene and eventually married a photographer and relocated to New Mexico and currently resides in Baja, California.

She referred to herself as a "gypsy tribal belly dancer hula hooper" and explained that the design on her forehead is a yin-yang, the tattoo on the right side of her face is Apache feathers, and that the left side and chin are Moroccan in their origins.

Catanya also told me that she had been photographed by someone named Stanley Stellar many years ago here in New York, and that he might have photos from those early days.

Thinking it would be great to have a photo of Catanya from when she was much younger with these tattoos, I tracked down Mr. Stellar and asked if he still had access to his photographs. He completely came through and forwarded this shot: 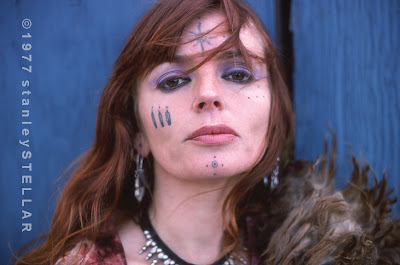 I certainly feel  fortunate to be able to share photos of the same tattoos, separated by thirty-three years.

Such an opportunity allows us to see an example of how one person has aged gracefully, along with her tattoos.

Catanya subsequently emailed me and elaborated on her tattoos and their history:


Back in the early 1970's I was part of a "tribal style" group of dancers and musicians from all over the world. The main things we had in common were our love of the Dance, world music, colorful costumes and even more colorful life styles. That included Henna, Kohl rimmed eyes and LOTS of Tattoos! We also sported plenty of nose jewelry!   The tattoos for all of us were personal and also tribal, (as can be seen in India, Morocco and other  exotic places around the world.) I do not think that any of us took our tattoo ceremonies lightly.

I received my first tattoos in Venice, Calif. in 1973.

I like to think of it as an initiation ceremony. It was wonderful! Lots of music and dancing and plenty of red wine and good herbs.

My tattoos were applied the "old fashioned" way. India Ink, a needle and a broken pen.

They were done by two brothers from Cuba. They were also fantastic Conga drummers!

A few years later, I had a few more tattoos added to my collection. These were executed by a wonderful tattoo artist, Boyd, in Taos, New Mexico.

I do not regret any of my tattoos and find as the years go by that I am actually "earning" them. I am becoming them. They ARE a personal manifestation of my journey in life.

As my friend Walter once said to me, (referring to my Eagle feathers tattoo), "Catanya, when I look into your eyes, I see that you are growing your real Eagle feathers."

The photo above was taken by Catnya's husband about eight years after Mr, Stellar's photo, with the late photographer Walter Chappell, their friend quoted by Catanya in her testimony.

I want to profusely thank Catanya for allowing me to photograph her and for sharing her tattoos with me, and all of us here on Tattoosday! It's an encounter like this that really stands out among the hundreds I have had over the last few years. To be able to see how someone has so gracefully and proudly worn their tattoos over time is truly an honor and a blessing.

I also want to thank Stanley Stellar for sharing his photograph of Catanya from so many years ago. You can see more of Mr. Stellar's photography here. Be sure to check out his wonderful tattoo photos under the "images" section.
Posted by Tattoosday at 6:20 AM

I just recently added your blog to my google reader and have been pleasantly surprised by it. This post is the best I've seen thus far. I just wanted you to know you have a fan in this young single father of two kids living in Omaha, NE. Keep up the fantastic work.

I love your post! Thanks to Catanya for sharing too, I love the part about earning them... Personnally my tattoos are always guiding me, bringing me back to my values and love.

I just found this blog and I want to congratulate you for such great information that you've got here!


So, keep up the great work!