In honor of the holiday, I am sharing this, my newest tattoo, located above my knee on my right thigh: 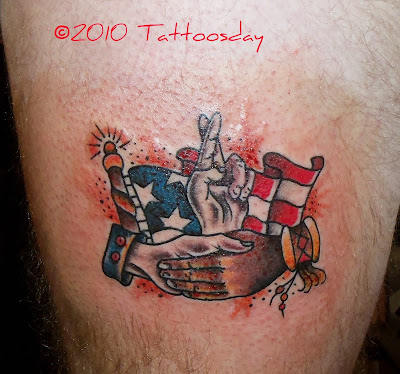 This was done at Hand of Glory in Brooklyn yesterday as part of the shop's $75 Thanksgiving Tattoo Special and was sponsored by Troll Skin, produced by Skin Actives Scientific. 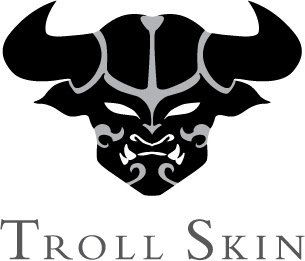 For those of you just tuning in, check the pre-post here, which includes all the Thanksgiving flash designed for the occasion. I asked readers to vote on which tattoo to get, and this one sneaked out a narrow victory over the traditional Native American profile.

I like this design because it combines a lot of traditional tattoo elements and delivers an image with a sociopolitical subtext. We have the traditional American flag and handshake designs, but the added element of crossed fingers serves as a reminder that, despite apparent good intentions, there was subsequently a historical betrayal of that initial good will.

But that's just one perspective, of course, and the Thanksgiving holiday focuses on the positive in our society. The mere existence of the tattoo reminds me to be thankful, which I alluded to in my original post.

I was fortunate enough to have Brian Faulk as my artist again. He had inked my Friday the 13th tattoo last August, and I appreciate that he works quickly and concisely.

It was nice, also, that this design was one of his contributions to the flash sheet, as he was kind enough to embellish slightly on the original design, and it always seems better when an artist is tattooing his or her own design. As for the idea behind it, he was trying to represent graphically a broken treaty. I'm extremely pleased with the end result.

In consideration for their sponsoring this tattoo, I will be exclusively using Skin Active's product, Troll Skin Aftercare over the next two weeks as the tattoo heals. I can already say I am pleased with the aftercare cream because it is a lot less messy than the ointment I am used to using within the first 72 hours after getting a tattoo.

I'll report back then on how their product held up compared to the regiment I've followed in the past.

I want to thank all of the readers who voted for designs, and for everyone who reads and supports the site.

And thanks again to Skin Actives for helping make this tattoo possible, to Brian at Hand of Glory, and to my family, at home in Brooklyn and across the U.S., for their support
Posted by Tattoosday at 9:42 AM