Let's take a moment and pause from our regularly-scheduled programming this Veteran's Day to remember the men and women who serve our country bravely. I've dug into the archives and reposted a friend's tattoo, which appeared originally here on Tattoosday in January 2008. Be sure to thank a Veteran today, and to appreciate not only our soldiers at home and abroad, but their families who support and inspire them to serve our country courageously.

Tracy is a friend of mine who lives in Fort Drum, New York. She was in town last weekend, visiting family, and this was the first time I have seen her since Tattoosday was born over the summer.

I knew Tracy had at least one tattoo, because she and my wife have talked ink before. So when I saw her on Saturday, unexpectedly, I was happy that I had a couple of Tattoosday printouts in my pocket.

I explained the blog and asked if she'd like to participate. She was happy to oblige and, as fortune would have it, she was coming to an indoor soccer game the following day. Her nephew plays on the same team as my daughter Shayna.

After the game Sunday, I asked if she was ready. She lifted the back of her shirt to reveal: 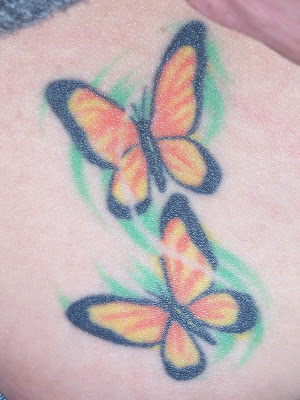 I was surprised, honestly. I was not expecting butterflies, but expecting the one above it which, as fate would have it, is later in this post. But I wasn't about to pass up a cool tattoo, so I took a picture of this one as well.

Tracy is a mother of two boys, Matthew and Danny, and these butterflies represent each of them, as they flutter and transform, as ones children are apt to do, growing from infants into people. Tracy had these inked three years ago in Victorville, when she was living at Ft. Irwin. She said that they had been done at "Victorville Designs," which has either changed names or gone out of business, based on this link.

These butterflies are nicely inked and really seem to float over the skin. Definitely a nice tattoo, from design to execution.

Above the butterflies is the tattoo that I had heard about: 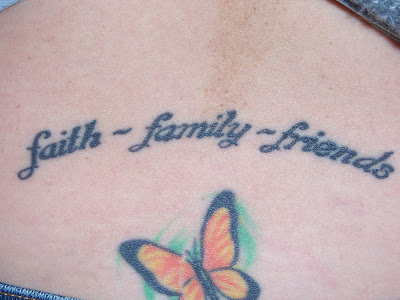 A simple, basic script. The arced triad of three pillars of strength in many people's lives: "Faith. Family. Friends."

In order to understand this tattoo, we have to take a little side journey.

Whatever one's politics may be, or however one feels about what we are doing in Asia and the Middle East, one thing must be acknowledged: the men and women in our military are there to do a job, to serve our country, and to fight to not only protect the people there, but here as well. Thousands of American men and women have given their lives and their souls to serve our country.

As one may have guessed by two prior references (Ft. Drum and Ft. Irwin), Tracy is closely tied to the United States Army, as she is married to Pete, who is a soldier with the 10th Mountain Division, Light Infantry.

On October 31, 2006, Pete's friend and fellow soldier, Major Douglas E. Sloan, was killed in the line of duty in the Wygal Valley in Afghanistan, while serving with Company B, 1st Battalion, 32nd Infantry Regiment. You can read more about Doug here at the Arlington National Cemetary website.

As every drop of spilled blood in the line of duty hits home, the loss of Major Sloan was devastating to his family and friends back in the States. The community of Fort Drum mourned Doug's passing and hearts went out to his wife Kerry and their children.

In December 2006, to pay tribute to Doug's memory, Tracy and three friends, including Kerry, went to Tattoos Forever in Evans Mills, NY, and each had the same inscription inked. In hindsight, Tracy recalls how funny it must have appeared, for four moms in minivans to drive up to the shop and collectively get tattooed.

It is a recurring theme on tattoo shows. Memorial tattoos are among the most popular types of body art. People mourn, heal, and remember through the art of the tattoo. And a piece of the loved one lives on, for years, in the flesh of the survivors, who gain strength and hold on to the memory of the departed.

The alliterative mantra of "Faith, Family, and Friends" reminds not only the tattooed, but those around them, of the most important things in life.

I want to thank Tracy for sharing her tattoos, and the stories behind them. I would add a special nod of gratitude to the memory of Major Douglas Sloan, who I never knew. Yet, by virtue of this tattoo, helped remind me of the sacrifice that our soldiers make day in, day out, and their families they leave behind.


Tracy's husband Pete subsequently returned from Afghanistan, but has since returned to duty overseas. On behalf of all of our Tattoosday readers, I want to thank Tracy and Pete, for their commitment and sacrifice, and for sharing this one story among thousands, with us here at Tattoosday.
Posted by Tattoosday at 6:36 AM