Not Your Typical Knuckles Tattoo

Last month I was trying to figure out why so many interesting people were walking around the Penn Station area when a trio of tattooed guys enlightened me: it was the Friday commencement of the New York Comic Con.

Now, I realize, I could go to one of these events and have a field day with some amazing tattoos on some very committed fans, but then I'd also be writing up posts for another month or two, as well, so I was content to chat with Rob and his two friends (who will appear in subsequent posts - stay tuned-).

Rob offered us one of his three tattoos, this animated creature on his inner right forearm: 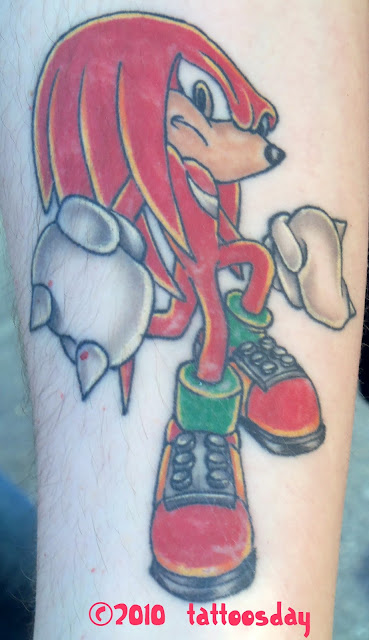 This is, I'm sure many of you may know, a character from Sonic the Hedgehog, an iconic video game series that appeared in the early 1990's and has since sold, according to Wikipedia, 70 million units worldwide.

Rob explained that he grew up playing Sonic games and his favorite character was Knuckles the Echidna, who first appeared in Sonic the Hedgehog 3. "He was the only one I wanted to be," Rob told me. An echidna, by the way, is another name for a spiny anteater.

Thanks to Rob for sharing his Knuckles Tattoo with us here on Tattoosday!
Posted by Tattoosday at 6:11 AM