Jenise's Tattoo is Decorative and Practical

Normally I would have prefaced this as a "Tattoos I Know" post, since the contributor, Jenise, has been a friend of mine since 1984. However, since we haven't actually seen each other in person in over twenty-five years, I've never actually met her tattooed self in the flesh.

Nonetheless, Jenise has been a fan and supporter of Tattoosday since its inception and has, from early on, told me that "one of these days" she'd send me shots of the tattoo circling her right wrist. Imagine my surprise when, out of the blue, the pictures finally arrived this week. So here it is: 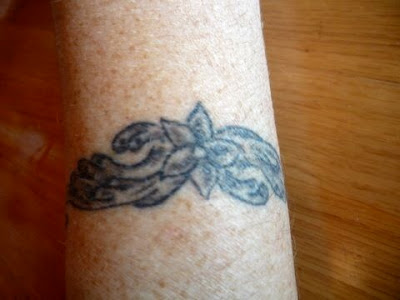 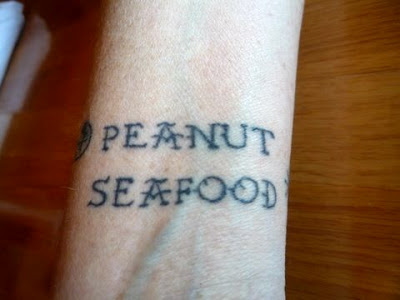 Jenise credits Clay at Willie's Tropical Tattoo in Daytona Beach, who inked these in February 2008. The piece was "designed to reflect [her] Hawaiian bracelet and it took [the artist] 2 hours to get it just the way he wanted it before he put the stencil on...".  As for the words "Peanut" and "Shellfish," the tattoo also acts as a quasi medic alert bracelet, indicating two foods which make her seriously ill. So there's a practical aspect to the piece, as well.

On a humorous note, she added "NO... these are NOT the nicknames of my children, I have been asked that more times than I can count".

Thanks to Jenise for sharing her tattoo with us here on Tattoosday!
Posted by Tattoosday at 6:00 AM