Repost: The World is Full of Kings and Queens

In lieu of something new, something borrowed, or something blue, I am offering up a post from three years ago, in Tattoosday's infancy, from January 2008:

I've been relying heavily on Tattoos I Know since the end of summer, but today, in the chill of January, I spotted a cool tattoo on a stranger and added him to the Tattoosday gallery: 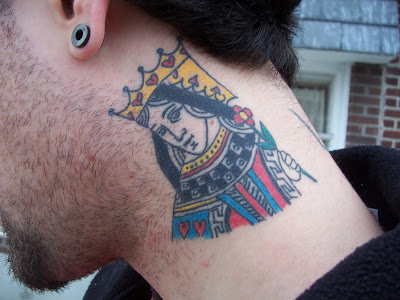 It was in the mid-30's when I asked Frank about his tattoo. He gladly offered up his newest piece, this playing card queen.

Frank is heavily-inked. He briefly flashed a leg and an arm covered with tattoos. But we stuck with this one. This particular piece, his newest, was done by Mike Profetto at Designs by Michael Angelo in Brooklyn.

When I asked him why he had this queen of hearts, he said it only made sense to complement the king of diamonds on the right side of his neck: 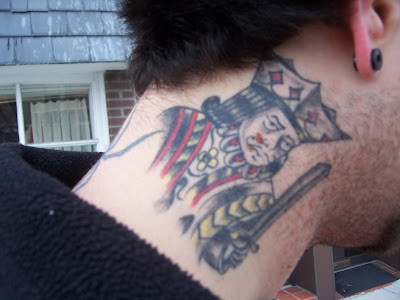 Incidentally, that's a spider on the back of his neck, between the two royal tattoos.

The queen, being the newer piece, is much brighter and crisper.

Frank is the first Tattoosday subject to offer up side neck pieces. He gave me his contact information, so I hope to feature Frank's work again in the future, with more detail about his tattoos, and the stories behind them.