I'm calling this a "lost and found" post because it features a tattoo that was a buried treasure in my e-mail archives. I was sitting on my living room couch when the existence of the photo surfaced in my head. "Whatever happened to that e-mail?" I asked myself and, after a brief search I found it. So, let me explain....
At the end of November, my wife Melanie received an e-mail from someone she met through her job. She often encounters people with tattoos and, if the work is interesting, and the subject arises, she will act as an ambassador to Tattoosday.
Toni is one such person who checked out the site, took pictures of her tattoo, and sent them to Melanie. She showed me the photos and promptly forwarded me the e-mail, which then sat for a spell in my in box before I inadvertently filed it away until I recalled it two months later.
So, without further ado, here is Toni's tattoo: 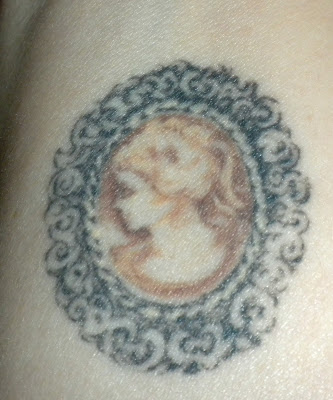 Not only did Toni send along this picture of the small cameo tattoo on her wrist, she sent along a healthy story to accompany the piece. We'll let her tell us about it in her own words:

My mother passed away six years ago on 11/17/2004. For a long time I wanted to get a tattoo in memory of her without doing the RIP MOM thing I’ve seen so many times before. I think it’s nice, but it is not my style. A little over two years ago my sister and I were going out with some friends for dinner and my sister was wearing this very Victorian-style blouse. Pinned to the front collar of the blouse was a cameo that has been in my family for many years. It was passed down from my Grandmother to my mother and now to my sister. As soon as I glanced at it, it hit me! I will get a tattoo of this Cameo and then realized it would not only be for my mom. My mother, my sister, and I are obsessed with the Victorian era! We love everything Victorian. My grandmother loved the Victorian times as well.
So I decided to bring the cameo with me to Twin Moon Tattoo shop [in Floral Park, Long Island] and had the artist Cindy sketch the cameo ... I love this tattoo so much, not only because it represents an era that I love but it also represents the three most important women in my life: my Grandmother, my Mother, & my sister! [Cindy] thought it was a little strange that I wanted it just below the inside wrist of my right arm and suggested I put it on the back of my neck or make it really big and put it in the middle of my back. I had explained the meaning behind the tattoo and how important it was for me that I see it everyday....That being said, she agreed and sketched it the actual size of the cameo and tattooed it on the inside of my arm right below the wrist.

Thanks to Toni for sending along the photo and the story behind it to Melanie, and for consenting to share her lovely cameo tattoo with us here on Tattoosday!
Posted by Tattoosday at 6:06 AM