Miguel's Vision Reveals What Lies Within

A few weeks back, I popped in at my wife's workplace, and she introduced me to Miguel, the husband of one of her colleagues. In warmer weather, she had seen that Miguel had a tattoo, and she thought I would be interested in talking to him about it. Unfortunately, at the moment, it was in the high 20's outside and Miguel had on layers of clothing, which covered the artwork on his upper right arm. I did, however, ask him to send me a photo when he got the chance.

Miguel was good to his word and e-mailed me the following photo: 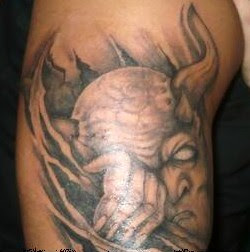 Miguel told me that, one night, a couple of years ago, during a difficult time in his life, he had a dream about the tattoo and, when he awoke, he drew up the image he had seen in his mind. The vision, to him, "represents the evil that people have inside". He took the idea to Sunset Tattoo in Brooklyn, and one of the artists  created the piece.

Thanks to Miguel for sharing his tattoo with us here on Tattoosday!
Posted by Tattoosday at 6:08 AM