Earlier this month I met Ryan, who has a whole host of tattoos. We were working on a project together, so we spent a bit of time chewing the fat, and he wanted to share this particular tattoo, which is on his right forearm: 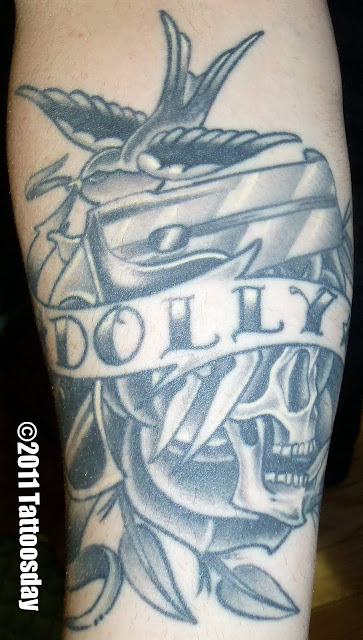 Ryan explained how he was raised by his grandmother, whose name was Dolly, but he just called Mom. She lived a full life, well into her nineties, and was pretty much the only mother he really knew. After she passed, he wanted something to memorialize her and got this tattoo which not only has her name, but a black rose, a skull, a sparrow, and a derringer. He elaborated about his grandmother's life:

"Back in the day, when she was 19 or 20 years old, she was in the Irish mob and she made whiskey and hooch and she would basically run it back and forth across state lines and that's how she made her money. That's how she supported her family. That's what the derringer is for, because she would always keep a derringer in her bra, just in case something happened ... the black rose ... is symbolic of her life and her passing, which is the skull ... the bird - she's free - you know, God always keeps his eye on the sparrow ... it's a montage of her very interesting life." 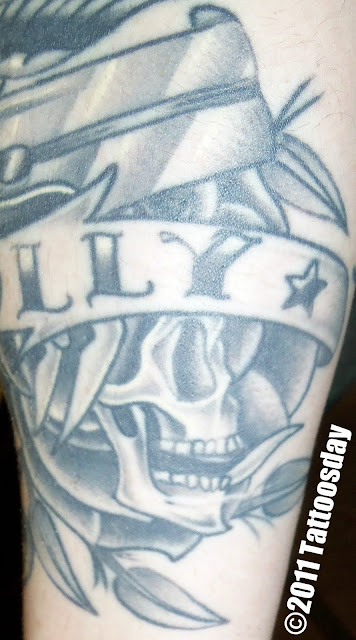 Ryan had this tattoo done in Mobile, Alabama, buy an artist he only knows as 'Link,' a tattooist who spent a lot of time in Philadelphia and who also owns a shop in Pensacola, Florida.

Thanks to Ryan for sharing this tattoo, along with Dolly's story, here on Tattoosday!

This entry is ©2011 Tattoosday.
If you are reading this on another web site other than Tattoosday, without attribution, please note that it has been copied without the author's permission and is in violation of copyright laws. Please feel free to visit http://tattoosday.blogspot.com and read our original content. Please let me know if you saw this elsewhere so I contact the webmaster of the offending site and advise them of this violation in their Terms of Use Agreement.
Posted by Tattoosday at 6:20 AM