Inkspotting in the Media: Daisy Shares a Horse Tattoo

Way back in January 2012, I was reading an article in The New York Times called "Continuing Education, At the Bar" which reported on the growing popularity of educational events in NYC watering holes, citing "The Secret Science Club" as one of the more popular of these phenomena.

The club's Carnivorous Nights annual Taxidermy Contest was the event that really stood out, and the Times article was accompanied by a slide show, featuring club members posing with their contest entries.

Several participants were sporting tattoos. As it was January, a "slow" time of year for Tattoosday, I thought it would be cool to perhaps reach out to some of these individuals and see if anyone might be interested. It could be a new series of sorts, say "Inkspotting in the Media," for lack of a better term.

One person I selected was Daisy Tainton:

I noticed she had a tattoo on her arm and, well, she looked pretty cool, so I found her on Facebook, and sent her a message inviting her to be on Tattoosday.

I didn't hear back from her until eight months later, last September, with a note apologizing that it took so long to respond, but my message had been delegated to one of Facebook's sub-folders.

To make a long story longer, the passed time had addled my memory, and I thought Daisy was a straggling tattooed poet, who was responding to one of my inquiries for the Tattooed Poets Project, for which I send out numerous inquiries every year. I politely told her I would reach out to her in the winter, when I started working on the following April's installment.

Well, ultimately, this was all sorted out, but only after Daisy had sent me photos of a tattoo on her upper left arm, just shortly after it had been inked: 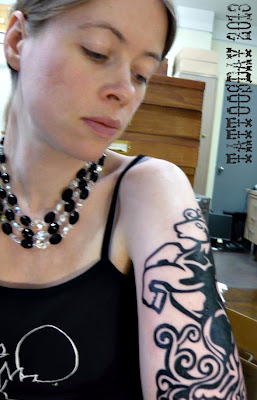 Here's the tattoo in better detail: 
"I saw a lamp in the window of Housing Works, snapped a photo through the grate (they were closed and the items in the window were to be sold upon store opening) and sent it to my good friend Nathan Burke. He drew it as a tattoo, and my boyfriend at the time fine-tuned it before I took it to Annie [Lloyd] and Three Kings Tattoo [in Brooklyn]."


"I am an Insect Preparator at the American Museum of Natural History. I love insect jewelry because it showcases nature's beauty and bounty -- and I feel good about using beetles that were farm raised instead of harvested wild. This way they get to live their full lives in peace and then live on as exquisite adornments in loving homes.

In addition, I have the pleasure of being a yearly entrant and award-winner in the Carnivorous Nights Brooklyn Taxidermy Contest, where in years past I have displayed many ridiculous and whimsical items ranging from beetle dioramas to antique fur coat sculptures to jewelry."

Here are some more great links about the Carnivorous Nights events:

This is a great video from Daily Motion:

And a piece in The Wall Street Journal online.

And this post which has a photo of one of Daisy's dioramas.

Thanks to Daisy Tainton for sharing her tattoo and introducing us to the art of competitive taxidermy!

Posted by Tattoosday at 8:17 AM