I had it all worked out. Last night was the first night of the Pearl Jam concert at Madison Square Garden. Even though I wasn't going, I would see plenty of ink right next to where I work. Pearl Jam fans are prolificly tattooed (see this site as proof). What could be easier?

One guy didn't want his tattoos photographed. And he was wearing a t-shirt for a tattoo shop on Oregon. In my disappointment, I forgot what it was called.

Another guy was in town from Italy to see the band. I think the language barrier was an issue.

But I am not generally discouraged. There was, however, a vibe. A general sense that something bigger and better was going on besides indulging the hobby of an almost-41-year old blogger in dire need of a haircut. And of course, they were right. Pearl Jam was returning to the Garden after five years. Really, Tattoosday had to take a back seat to that.

But thank goodness for Jessica. She was thoroughly inked and indulged me. Granted, she seemed a little bemused by my exercise and a little disinterested, but she did let me take some photos and gave me cursory explanations. Alas, no Pearl Jam tattoos, but she still had some cool ink.

This was her most meaningful tattoo: 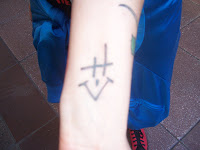 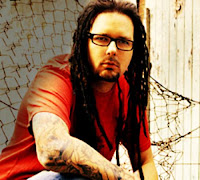 It's on her left wrist and is the autograph of Jonathan Davis, lead singer of Korn. He signed it, and she inked it. Jessica has her own tattoo machine, and does some touch-ups and basic line work here and there. Embarassingly, when she said it was Jonathan Davis' autograph, I couldn't connect the name to the face right away and I asked who he was, knowing full well that doing so would make me look like a total dork. And I was right. Of course I knew who he was, I just didn't compute it at the time. 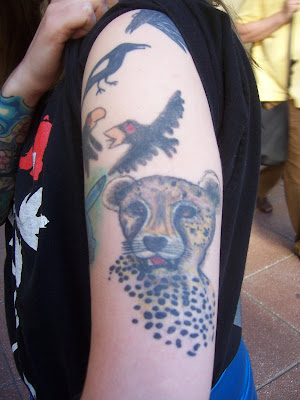 She likes crows. She has seven in all. She didn't tell me why the cheetah was significant. If you look at her right arm, you can see a sliver of an amazing piece that I didn't photograph, but should have. It was amazing piece that encircled her forearm.

And here's her upper right arm. That's Pig-Pen from Peanuts, which was one of her nicknames growing up. 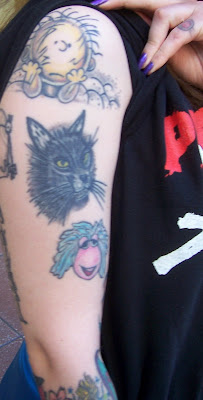 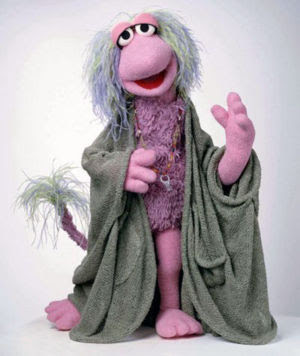 And on the bottom is Mokey, a "primary Fraggle" from Fraggle Rock. Mokey was also one of her nicknames from very early in life.

Thanks to Jessica for taking the time to chat with me when so few people seemed interested in sharing. I am celebrating my birthday a week early at the show tonight (Wednesday), so we'll see if any tattoos pop up here on Thursday (or Friday).

Jessica followed up with me and wrote the following:

I may not have any Pearl Jam tattoos, unless you count that my nickname is Mookie (Mokey from Fraggle Rock) since I was a toddler, from my dad. My mom calls me Pigpen cause she's a obessive complusive neat freak who thinks an open TV Guide is a mess...

I've idolized Jonathan Davis from Korn since 1996. To finally meet him was amazing. I always thought I'd be starstruck and lose my composure, but didn't. I held a conversation with him. Wow. How did that happen? A group was forming around the tour bus. He came out...to sign autographs. I told him he was my idol for 12 years, and asked if he could sign my wrist. So he grabbed my wrist. On the outside I was fine, but in my head I turned into a 12-year old boy band fan thinking OMG OMG HE'S TOUCHING ME DON'T FAINT!!

The Mokie tattoo, above, was inked by Troy at K & B Tattooing in Hightstown, New Jersey.
Posted by Tattoosday at 4:51 AM

no ones ever come up to me asking for photos of my tattoos.kool little article. i like cheetahs too.. good pic of mokey! i just scanned and emailed you my right arms sleeve that you got a sliver of. you can post it if you like. my geisha and foo dogs. geisha means "ARTIST"

don't ever use the term tattoo gun. it's a machine, not a gun.