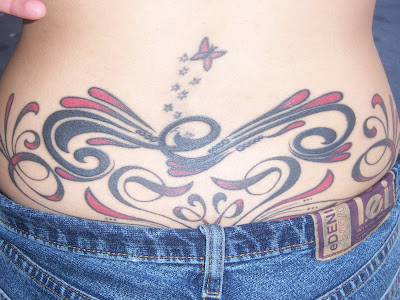 Krystynna walked by me on 7th Avenue on Monday, and her tattoos on her wrists, behind her right ear, and her left bicep were totally cool.

When I realized a sidewalk photo of her quarter-sleeve wouldn't do it justice, which she confirmed when she later told me it ran up onto her shoulder, I asked if she would rather have me take a picture of a different tattoo.

Kristynna surprised me by offering up her first tattoo, a large lower back piece. Remember, folks, I never take a lower back tattoo unless its offered, according to the Tattoosday Code of Conduct.

Kristynna got the initial piece on the lower back, some flash art on the wall at Armageddon Tattoo when she was 17, ten years ago. She subsequently added little bits and pieces to make it into a larger piece over the years.

She has 9 tattoos in all, all done by Iann at Armageddon. Kristynna works as a Special Needs Educator for kids and acknowledges that the children love her tattoos, and the parents have no issues with them, either. This is good news, because the tattoos she has visible are extremely well-done, and I am looking forward to her sending me shots of the arm that do the piece
justice.

Thanks to Kristynna for sharing her ink with us here on Tattoosday!
Posted by Tattoosday at 5:52 AM