Tattoos from the Blogosphere: Mat's Take on the Sugar Skull

Everyone remember Mat? His ink has appeared previously on Tattoosday here and here. Well, he has been a lean, mean tattoo-accumulating machine. Remember the infinity symbol on his wrist? It has a new neighbor: 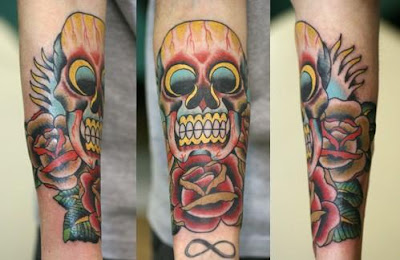 Well Matt hat some might awesome work, and this piece just adds to the oeuvre of his canvas.

This is what is known as a Mexican sugar skull (a common recurring element at Tattoosday - in fact I just shot a new one on yesterday that will make its way here next week). Since Mat is currentl residing in Texas, let's let him explain this piece (with my scant editing, of course)...

It is a sugar skull, yes. Any work done on my forearms is significant to my son [Jack], and that's about it...[Jack's name is tattooed on the opposite wrist]

Since El Día de los Muertos [The Day of the Dead] is celebrated November 1 & 2, and Jack was born on November 1, I thought it would be fitting as I mulled over more and more the significance of the first day in the Day of the Dead celebration. The strange part is that the celebration on the first day is meant to honor the deceased infants and small children, whereas the second day is in honor of grown-ups/adults.

Also, we've noticed Jack at a super young age responsive to non-existent beings, as if he was communicating or interacting with something that wasn't there. It is said that during the Day of the Dead, it is easier for the departed to visit and communicate with the living.

After learning that, and remembering how focused he was as an infant on these things that I really wasn't able to make sense of, it all tied itself together.

Since it basically wraps my forearm, it's kind of hard to see how it is bookended by a rose on each side, ocher-shaded, and footnoted by a traditional red rose with okra folds.

This was also another piece by Travis Stanley at 713 Tattoo Parlour in Houston, and was tackled as we went along. I enjoy working like that- researching with the artist and maintaining the level of comfort to develop a meaningful piece that sometimes only makes itself apparent after a day or so of life on the body.

The bizarre color scheme and the bluish brain matter seen behind the top of the piece, behind the red cracks in the skull, are meant to convey the playfulness of a candy skull, but also to introduce a slight feeling of discomfort or uncertainty when a closer look is taken.

Thanks to Mat for sending this along, and giving us a behind-the-scenes perspective of the piece. We can always rely on Mat to get us to look beyond the tattoo and come to a better understanding of the thought process, as well as the creative instincts, that helped craft his body art.
Posted by Tattoosday at 12:02 AM