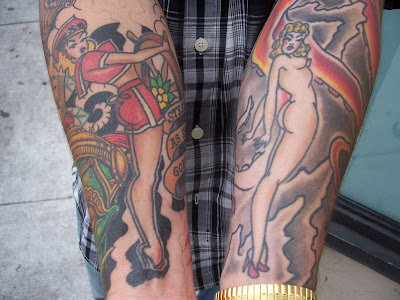 I ran into Peter a couple of Sundays ago, caught without my camera at the local 7-Eleven, so I left him with a flier so he could check out Tattoosday . He did, and e-mailed me shortly thereafter, offering to meet up, take pictures, and talk tattooing. This past Sunday, we reconnected in front of the 7-Eleven and I took a few shots of his awesome tattoos.

Here's Peter with his forearms extended: 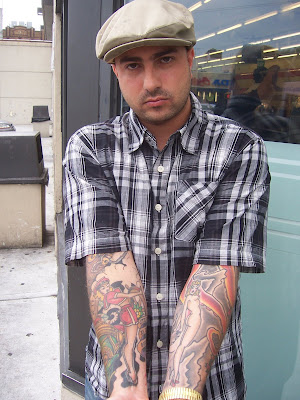 Your standard article on the popularity of tattooing in 2008 always looks back to the old days, back when the only inked folks around (supposedly) were bikers, veterans or sailors, criminals and circus performers.

But we are living in an "enlightened" era, says the conventional wisdom, when there is a lot less stigma attached to the art. Tattooing was illegal in New York City from the early 1960's to the mid-1990's.

Peter remembers growing up in Bensonhurst and admiring the tattoos of the neighborhood heavies. There was a lot of admiration for the tattooed gangster-types that were the fixtures in the neighborhood delis, hanging out in front of the mom-and-pop stores, and being active in the community.

Peter admired the ink, and that old school style has influenced not only his own work, but the work he had done on himself.

Peter learned from, and was influenced by, those artists he considers to be the "Old School" of Brooklyn tattooists.

He worked with and apprenticed under Paul Raffelo of Paulie Tattoo and Vito of Vito Tattoo.

He estimates that he has approximately 13 tattoos, including 2 full sleeves.

A closer look at the pin-ups on his forearms shows a style of tattoo that is classic old-school. Peter said that this was the type of tattoo that was typical in the old neighborhood he grew up in. 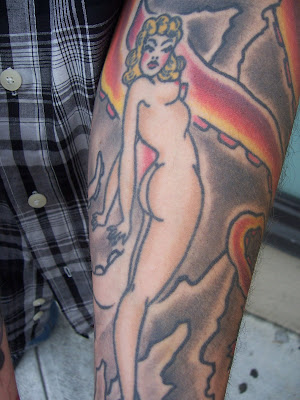 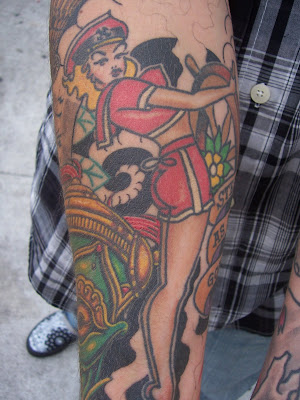 The "Steady as She Goes" motto was a standard phrase in a lot of old naval flash art.

These pinups were inked by Paulie Tattoos. 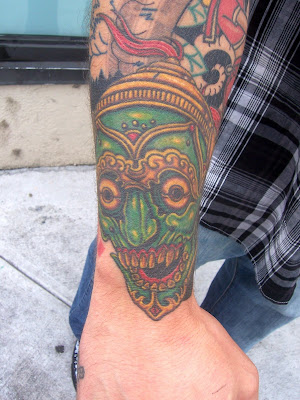 The mask is used, according to tradition, to drink the blood from the head in an attempt to keep the spirit alive after the body dies. Vito of Vito tattoos was the artist.

Peter is also particularly proud of this Sanskrit piece on his forearm: 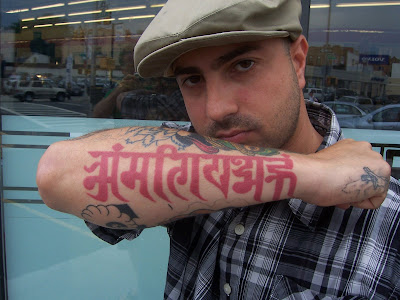 Peter explained that this represents the thunderbolt that destroys ignorance, a concept explained by the term vajra and a precept in Buddhism that leads to the destruction of ignorance through enlightenment.

Thanks to Peter Caruso for sharing his tattoos here on Tattoosday. Peter is currently working free-lance and can be contacted by clicking here.
Posted by Tattoosday at 5:31 AM