Repost for Father's Day: Memorial for a Father

It only seems fitting that, on Father's Day, I repost a special tattoo for a father. I had several to choose from (here and here), but settled on this one, from December 4, 2007:

On a cold morning in the beginning of November, I spied a tattoo on the bare left calf of a guy at the corner of 31st and 7th in Manhattan. He crossed the street, walking the same direction I was headed and, lo and behold, headed into the Starbucks in my office building.

He was ahead of me in line and after he ordered, I expressed admiration for his tattoo: 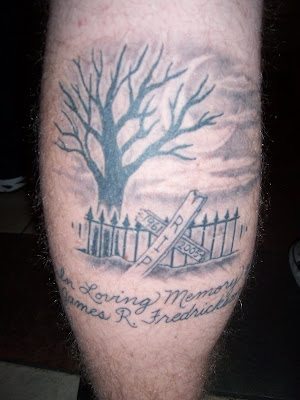 Obviously, it's a memorial tattoo. The host's name is Jim and, as he explained, his father had passed away 3 years ago. I didn't notice until later when I uploaded the picture, the dates 1961-2005, making his father 43 or 44 when he died. The inscription reads "In Loving Memory James R. Frederickson".

Jim explained the tattoo for me. His father wanted to be cremated, so the tattoo is an ersatz grave site. He also added in the cheap, wooden cross, because his father always had been critical of people who spent a ton of money on grave markers.

Jim explained that the piece took him 2 1/2 years to design and get just right, so it must have been completed in the past year. It was inked at Lake Geneva Tattoo.

Thanks to Jim for sharing his tattoo with me!

Posted by Tattoosday at 4:50 AM