I met Bill in mid-September on the 34th Street train platform while waiting for a downtown A train.

You may have heard of the scent known as a "new car smell". Bill had whatis known as a "new tattoo sheen," which occurs when one anoints a fresh tattoo with a healing ointment used to protect the ink. 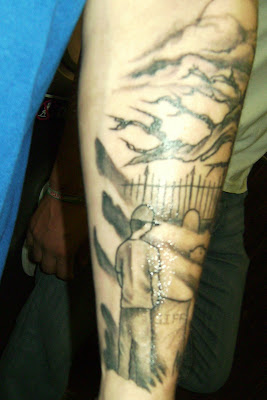 The tattoo depicts himself, seen from the back, standing in reverence at the graves of his grandfather "Giff" and his uncle Giff Jr.

It's a nice way to memorialize his family. This was inked by Aaron at Red Rocket Tattoo East, in Levittown on Long Island.

Bill has a great tattoo on his outer right forearm, as well. Whereas his left arm is a memorial to those in his family that passed before him, his other piece pays tribute to a newer generation:

In this piece, two traditional swallows hold aloft a banner bearing the name of his daughter, Allana.

This tattoo, his first, was done by Greg Fly at The Tattoo Shop on Rte 112 in Medford, L.I.

Thanks to Bill for sharing his tattoos with us here on Tattoosday!
Posted by Tattoosday at 6:04 AM

Thanks for putting my work up. You have a great website.