I was a happy little inkblogger last Friday night when I made it to the 4th anniversary group art show at Tattoo Culture in Williamsburg, Brooklyn.

Happy, because I got to meet the awesome Marisa Kakoulas from the fabulous Needles and Sins tattoo blog, along with the equally-cool Brian Grosz, who is also a major creative force behind the site.

And happy because I was in a bright room with art on the walls, created by talented tattooists, and I was surrounded by people with incredible body art.

But therein lies the conundrum: great tattoos, in a hip tattoo setting, are top quality and, despite Tattoosday's success, I am still reluctant to whip out the Polaroid digital camera when, for all I know, the ink around me may have been professionally photographed and featured in glossy tattoo magazines.

So I had resigned myself to leave sans photos, knowing I had a groovy time and was able to meet other tattoo writers, when I noticed a very interesting sugar skull on the back of a young woman's right arm. Voila: 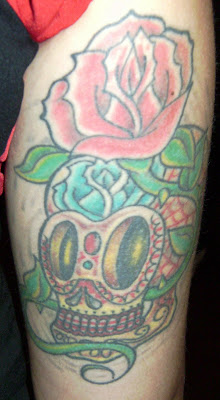 Of course I chatted a long time with Magie before I asked her if I could snap a picture, so I learned a bit about the tattoo before I asked.

Magie Serpica is an artist and tattooist who works at the newly-opened Bound for Glory Tattoo Studio in Staten Island. 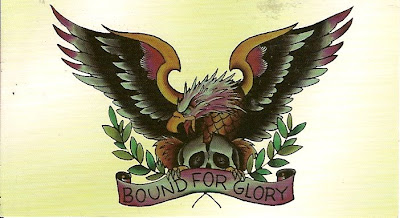 The shop was co-founded by Nick Caruso who also tattoos at Flyrite Studio in Brooklyn. One of Nick's tattoos appeared here back in July on Tattoosday.

One of Magie's paintings was hanging on the wall at Tattoo Culture: 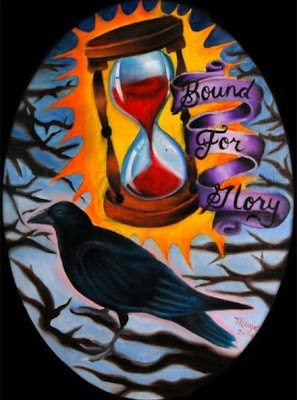 (reprinted with permission of the artist)
We talked at length about tattoos, what she called an under-served market on Staten Island (they are the first full-custom shop) in the borough (no flash on the walls, please) and have a promising future ahead.

We also discussed how difficult it has been in the past to be a female tattoo artist, how frustrating it is not to be taken seriously, and how Kat Von D. and the multitude of tattoo reality shows have helped break down the stereotypes and allowed Magie, as a female artist, to receive more respect as an artist.

Like most tattoo artists, Magie is covered in ink, with no idea how many tattoos she has ("If you can still see skin, it's not enough").

The sugar skull in question was tattooed by Anthony Gregory, aka Big Ant, a Staten Island artist who tragically passed away last year after falling ill in Las Vegas (see the sad news reported here). 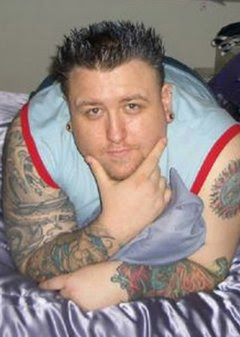 She had asked him to give her a sugar skull and she had a general idea about his style, so she gave him total artistic freedom. The end result was fascinating - a unique, almost post-modern interpretation of a classic tattoo design. The angled perspective and the depth to the eyes give this tattoo a greater three-dimensional feel than your standard sugar skull.

I also like how the rose is just as important as the skull, its stem wrapping around it and adding another layer of depth.

I thank the good people at Tattoo Culture for opening their doors and allowing me the opportunity to meet some great people.

A special thanks to Magie for sharing her awesome tattoo with us here on Tattoosday. Be sure to visit her in the new shop, Bound for Glory, in Staten Island.

Here's hoping we'll see more of their work in the future!
Posted by Tattoosday at 10:23 AM

so wonderful meeting you. love the write-up on Magie's story. rockin!

Interesting post... I can see that you put a lot of hard work on your blog. I'm sure I'd visit here more often.
George,
magie.

I actually got my first "nice" tattoo from big ant in late may of '07. It was a spur of the moment thing but it came out beautiful. He free-handed "Love Life" in a very unique style on my inner bicep, I get so many compliments on it still to this day. I miss the big guy. He was an amazing artist/person.