James Shares His Love of The Nightmare Before Christmas 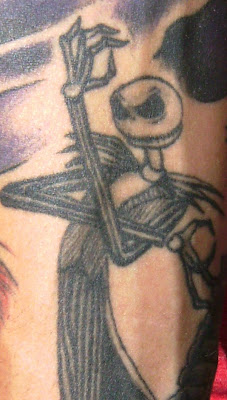 I saw The Nightmare Before Christmas when it first came out in theaters and it instantly became one of my favorite movies.

I am certainly not alone in this sentiment.

I had always wanted a Nightmare tattoo, as many may agree, the artistic style of the film lends itself splendidly to a tattoo motif. The appeal is widespread, as evidenced by the popularity of the characters Jack Skellington and his girlfriend Sally in ink.

The style was most likely seen by the most people on the left arm of Daisy de la Hoya, one of the contestants on VH1's Rock of Love 2 "reality" show (and the subsequent spin-off, "Daisy of Love"). 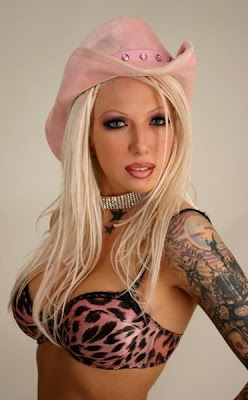 Nonetheless, despite the popularity of these tattoos, I will still happily post them here, when I find them, and they are offered. See these previous examples.

Several weeks ago, by the James A. Farley Post Office on 31st Street in Manhattan, I met James, who had this Nightmare sleeve:

James has liked the movie since he was young (which made me feel old) and is a huge fan. He has seven tattoos, but this piece, which was inked in five sittings, is the centerpiece of his collection. 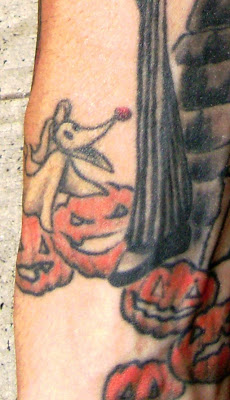 The was inked at Whatever Tattoo in Manhattan. Work from Whatever has appeared previously on Tattoosday here.

Say what you want about the "trendiness" of Nightmare Before Christmas tattoos, but I think that their popularity stems not only from the love of the film, but the macabre side of traditional "dark" tattoos, softened by the warmth of a film that many associate with youth and innocence.

Thanks to James for sharing his tattoo with us here on Tattoosday!
Posted by Tattoosday at 5:34 AM